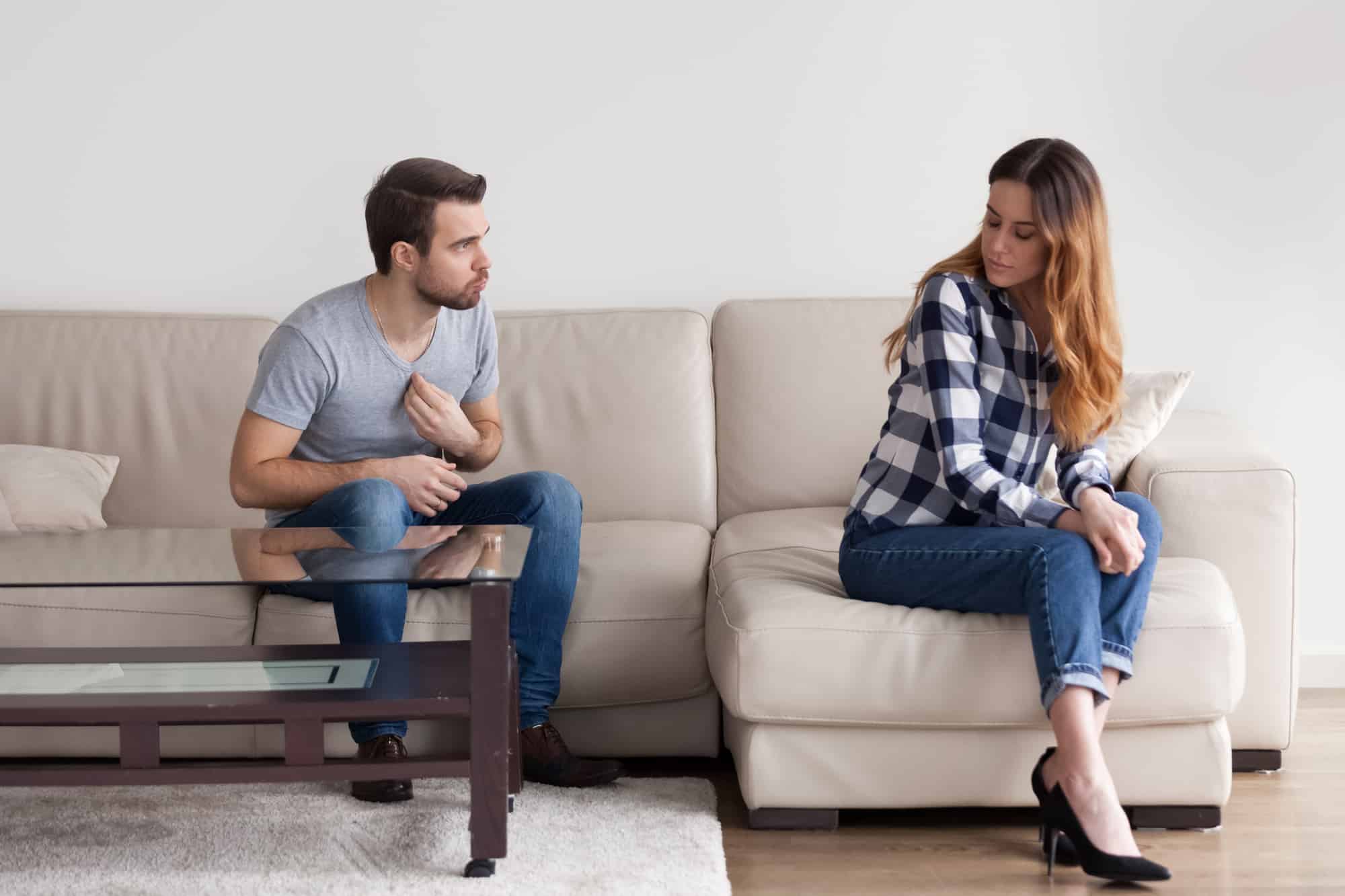 Marriage is a tough gig. Staying happy and content for the rest of your life is very difficult. To make it as easy as possible, two people have to be able to talk to one another to work through any issue that may arise.

Here, we look at ways to cope with defensive behavior. When a person gets defensive it can be very tricky to maintain healthy communication between one partner and another. In fact, this type of response can often make an issue worse between two people.

This is why it is so key not only to know what to do if you have a partner who often exhibits defensive behavior but also to know why your partner may feel the need to act in this way.

Why Does My Husband Get Defensive When I Tell Him How I Feel?

Getting defensive is a very common reaction between two people, especially if an alpha male is involved. Some people simply do not take criticism very well - even if it was meant kindly. Additionally, by getting defensive, people steer clear of accepting responsibility and don’t have to accept any of the blame that maybe being put at their door.

Here are our suggestions for dealing with a defensive partner. It’s is probably best not to use all tactics at once - it will be too confusing for both you and your other half. Instead, use one or two at a time to see if they are helpful. If they’re not, try another way.

It may sound like a strong response, but sometimes going to couple’s therapy can be a really beneficial way of improving the communication between two people in a relationship. You may feel like you shouldn’t need someone else to help work through your problems, but therapists simply provide guidance on how to talk to your partner better.

Simply stopping a person in their tracks by pointing out when they are reacting with defensiveness can be a good way to address this type of behavior. You may feel like it is a bit too confrontational, but sometimes a person will not realize when they are acting defensively, and also how often.

Perhaps this is the most difficult thing of all, but trying to have patience when things are tough with you and your partner is one of the most helpful things you can do. Stay calm when he gets defensive and then calmly talk through your side of the story.

4. Highlight how his actions affect you

A reason that a person often acts out with defensiveness is to push away any acknowledgment of guilt or blame. To stop this from happening with your partner, therefore, simply highlight what his actions do to you when he gets defensive. If he knows how it hurts you, he may try to address his response in the future with different behavior.

If your partner is consistently getting defensive so that you cannot actually address the larger issue at play, it can be a good idea simply to have a time out from the argument itself. Otherwise, the argument can become about other things that are not addressing the issue at hand. While walking away will stop your communication in the immediate future, it can actually help it in the long run.

6. Ask a friend to talk to him

Sometimes, a partner cannot take any form of criticism from their other half. The closeness of the relationship creates an unconscious bias against you. Bearing that in mind, it can be a good idea to ask a person who is close to your partner to talk to him about his behavior and how it is affecting the general health of your relationship and its future.

7. Stress that you love him

When someone acts out with defensiveness it can be a good idea to underline how much you care for them. It can remind them that you are coming from a place of love and affection so that your intention is not to hurt them by what you are saying. It can help calm or diffuse many situations.

It can be tiring dealing with someone who acts out in this way but does try to be tactful in your communication with your partner. Take the time to find your words carefully if you can, while allowing yourself to feel and know that your emotions or reactions are equally valid and legitimate.

9. Never directly say he is wrong

Directly telling a partner who is guilty of acting with this behavior that they are wrong is like a red rag to a bull. Try to err on the side of caution and steer clear of laying any blame at anyone’s feet. It can be a good idea to highlight how you would have done things differently and see what response you get from him

10. Ask him about his anger

When your partner cannot acknowledge any guilt in a situation it can be tricky to work through the problem itself. This is made worse as often defensiveness is characterized by an angry emotion too. If that is the case with your partner, ask him about his anger as well as highlighting how his anger makes you feel. Often, it will mean that they will at least try to tone down the heated nature of how they are communicating.

11. Point out the effect it has on your relationship

The problem with defensiveness is that it can stop you from sorting out any issue when it arises. As opposed to talking through the larger problem, you spend your time trying to get your partner off the defense and actually talk through what has really upset you. This will have wider and longer-lasting issues in your relationship. Point this out to him so that he tries to engage in a constructive conversation with you instead.

12. Ask a friend for advice

Before entering into a discussion with an overly sensitive partner, it can be a good idea to talk through the issue with a friend first. They may give you some outside counsel on the situation so that you can confirm whether you do have the right to be upset or not. If you do, obviously talk it through with your partner as best you can. If you don’t, you have saved yourself an argument.

13. Accept that you may have some fault

It is important to remember that nobody is perfect - including yourself. While you may well feel like the eternally injured party, remember that there will be times that you too have to apologize for something that you have done wrong. It will help maintain a healthy balance between you.

How do I express my feelings to my husband without him getting defensive?

Highlighting to your husband that he has got defensive is one of the key ways to stop him in his tracks and make him listen to you. Also, emphasize that you are in the relationship too and that you are unhappy so need to address some of the issues that have transpired from his (and your) actions.

Defensiveness is definitely a sign of guilt and an inability to accept responsibility for situations. However, you must also be aware that you cannot always be right either. So, do try to listen to your partner and digest whether he is simply not accepting your opinion, or if he does actually have a point.

Why is my husband so defensive?

Defensiveness and defensive behavior are often a symptom of an alpha male being incapable of ever being wrong. It can be tough to cope with but you must remember that your relationship needs balance and understanding to work. Remember you have your own needs that must be addressed.

How can you tell if someone is defensive?

A person’s body language will be the first thing to give away whether they are getting defensive or not. They will physically put up some form of barrier between you and them when you are talking. It means they can fold their arms, fold their legs, or turn their head away from you.

What are the signs of an unhappy marriage?

An unhappy marriage is often characterized by a lack of constructive communication, infidelity, and deep-seated resentment between two people. What can make matters worse is a couple’s lack of want to sort through their issues - often brought on by a defensiveness in one or both of them.

It can be so hard coping with a partner who jumps straight on the defense when you try to broach a subject that has been troubling you. However, remember that your feelings are also valid and your needs from your relationship have to be met for you to be happy.

If you are not, your relationship will never bring either of you contentment or joy. Being able to argue constructively as a couple is key to a relationship’s success, so you need to work through your partner’s immediate defensiveness to bring you both any sort of resolution.

You May Also Like
Boyfriend Doesn’t Compliment Me (Should You Worry?)
3 Comments
When A Guy Ignores You After An Argument (Do These 5 Things)
6 Comments
Relationship Red Flags (51 Signs to Look Out For)
No Comments 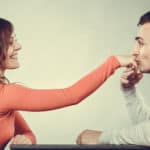