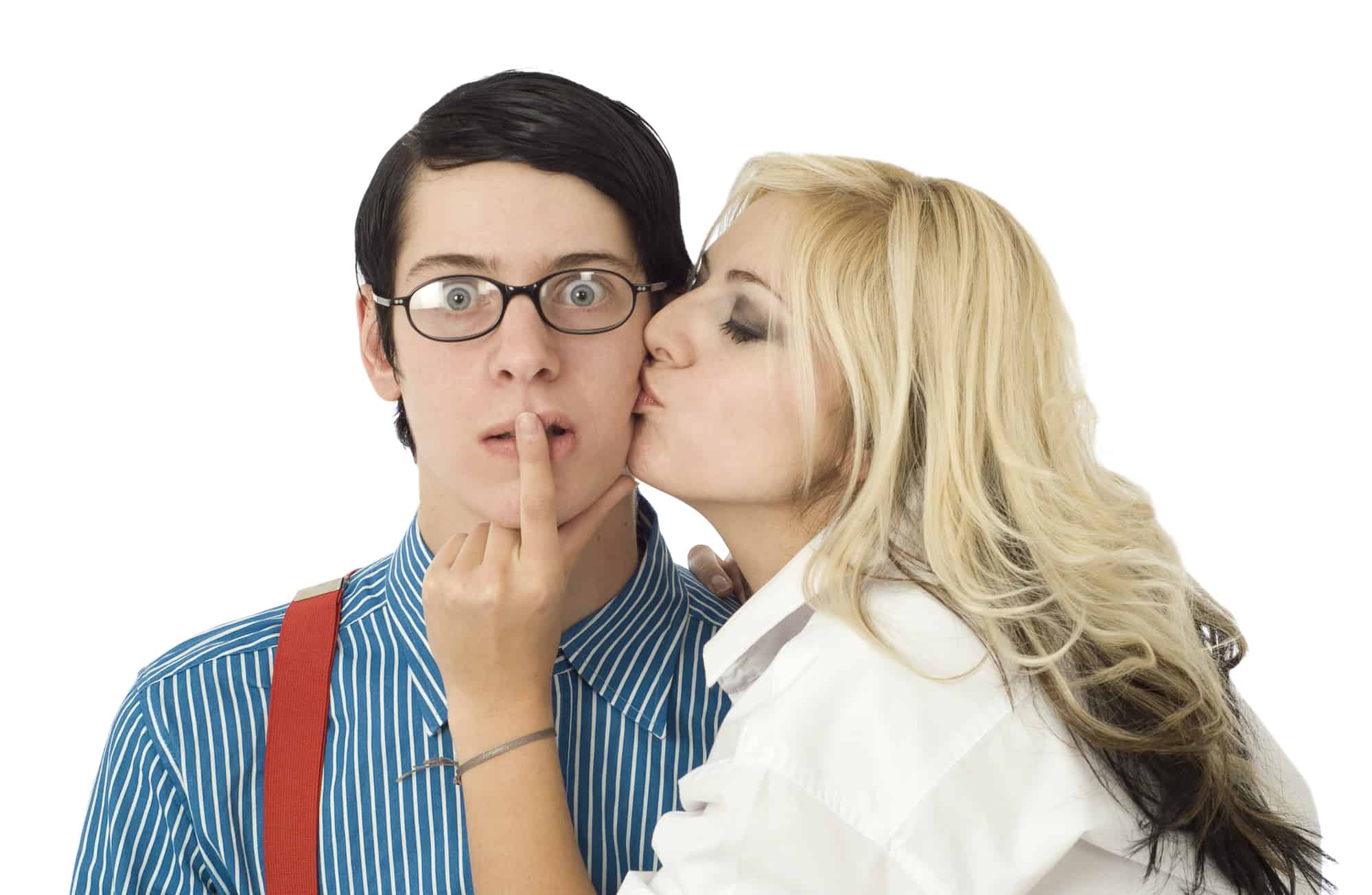 Newsflash – nerds are cool! You only have to think of Bill Gates, Mark Zuckerberg, or Elon Musk to get the picture. These guys weren’t racing across the soccer pitch attracting attention from adoring cheerleaders.

They were the ones in the college library swotting to pass their next test. But you know what? In dating, they are the best boyfriends.

Today nerd guys rule. If you’re a woman dating a nerdy guy – congratulations. You’ve made the connection between a great guy and a nerdy guy.

If you haven’t recognised the full potential of the nerd, I’m here to enlighten you. Now, you might think that you know everything about nerdy men. You may believe that there is a nerd stereotype and that dating a nerd means playing video games and watching Star Wars.

There are lots of reasons why you should date a nerd guy.

Are 15 Reasons Why You Should Be Dating A Nerdy Guy

1. They're not trying to impress anyone

At school, girls don't date nerds. More likely they are bullied or left out from the cool crowds. But in the dating world, it is a different story.

The nerdy guy has learned that it is ok to have different interests and quirks.

They beat to their own drum, and they are happy with that. As a result, they know they don’t have to impress anyone.

If they want to go to comic con or binge-watch reruns of Star Trek or Star Wars they will. And there’s an authenticity about living your life this way.

2. Nerdy guys are happy to stay in

Have you ever wished for relationships where the guy wanted to stay in a cuddle up on the couch with you? Now you have one. No longer do you have to stand in a cold football stadium pretending to love watching your fella run around the pitch.

No longer you are forced to pack your gym bag and work out with your fitness-mad boyfriend. Don’t fancy clubbing tonight? Give your guy a call, he’ll only be too pleased to curl up with you and binge-snack your way through pint-sized popcorn and your favourite romcoms.

Some men get their self-esteem through their body. You know the type; perhaps they aren’t that tall, so they go wide and muscly instead. Others get it through material things, such as expensive cars or boy toys.

Nerds get their self-confidence from within. Nerds and geeks don’t need validation from other people. Their intellect gives them confidence. As a result, they don’t feel the need to show off or compensate in other ways.

Because a geek doesn’t have a big ego, you can tell them and teach them stuff. And by stuff, I mean sex. We all know that it can take a while for a guy to get to know our bodies and what turns us on. Some guys are happy to be shown.

On the other hand, some guys think they know it all and get upset, even angry if we try and tell them what works for us.

Not the nerd. He will listen patiently, practise until he gets it right. He is happy to take instruction. He knows that it doesn’t reflect on his prowess as a man. It reflects better on him to be observant and willing to learn.

The very definition of a nerd is passion, and with passion comes a whole lot of other characteristics. I’ll give you some examples; passion leads to curiosity, which then leads to a desire to learn.

Learning is the core of intelligence. When we are passionate about a subject, quite often this overlaps into other areas of our lives. So a nerd that is passionate about computers might be good at taking things apart and fixing them.

Or a guy that is a math geek may love tackling your tax accounts for you. You see, there are lots of advantages to dating a geek!

6. They have a cracking sense of humour

The school was hard for nerds. Many of them honed their sense of humour to cope with negative comments or bullying. Coupled with their intellectual prowess, these guys are super-fast when it comes to cracking the funnies.

Their observational humour is second to none. The great thing about nerds is that they can take a joke and just run with it. Puns, inside jokes, jokes that only you two are in on will take a life of their own.

7. They value personality over appearance

If you are dating a nerdy guy, you don’t have to worry about not wearing makeup or slopping around in trackie bottoms. Your boyfriend won’t think any less of you because he didn’t start a relationship with you because of your appearance.

He took the time to get to know you as a person. He values your personality and character. Besides, he can’t really judge you when his prize possession is a Pokémon tie. So he won’t care if you put on a few pounds or lose a few.

8. Nerdy guys do not judge

Nerds are the most non-judgmental people in a relationship. Perhaps it is because they suffered at school. Or maybe it is because of their weird passions.

A geek knows that whatever makes you happy is ok. Nerds think it is cool to have a collection of 400 porcelain frogs in your bedroom. Or to only wear the colour purple. A geek will live and let live.

When it came to dishing out the manipulative bone nerds got left out. Nerds live their authentic life, so why would they start to play mind games with the woman they love? It is not in their nature.

It’s a little like flirting; nerds don’t know how to do it. Think of your typical nerd as if he or she was a computer. They lack the hardware for scheming or devious behaviour.

The good news is that they do have a big commitment chip!

10. You can be yourself with a nerd

Isn’t it exhausting dating a cool hunk that works out every day and looks gorgeous without trying? You have to be on your A-game every second. You cannot relax and be yourself. Well, with a nerd, you can.

Undo a button or two if you’ve eaten too much, your nerd won’t bat an eyelid. Shout and holler at the TV when your favorite girl gets eliminated from America’s Top Model. Get that poster of Chris Pratt laminated because you want it to last. They’ll be reading comic books anyway.

11. You are always learning when you date a nerd

Nerds don’t just know about the things they are passionate about, they know other interesting stuff too. Nerds are naturally curious, and they soak up knowledge like a sponge.

Their minds go off on tangents. If a nerd doesn’t know something, he or she will go out of their way to find out about it. Nerds are secret treasure troves of weird facts and interests that will amaze and delight you.

Have you ever had a boyfriend that said he would fix your computer or car or TV? Then weeks later he still hasn’t gotten around to touching it? You will never have that problem with a nerd.

The chances are that he or she will know how to fix your stuff, but if they don’t they will know someone who does. And they don’t hang about either. Nerds are proactive, they don’t procrastinate.

It’s no surprise that geeks are more sensitive than your Average Joe. They can pick up on a person’s mood in no time. Nerds are emphatic and compassionate people. Remember, they’ve probably been through tough times themselves.

As such, they can recognise the signs that someone is sad or upset. And they won’t want you to hide your feelings from them either.

I dated a guy once that loved this particular football team. Every weekend we would travel to away games or stay and watch the home games. It didn’t matter what the weather was or if I had something else I wanted to do.

Not only that, but he watched all the other football games. This was to keep score of the matches in the league. As someone who hates football, this was torture at its most brutal. I rest my case.

Finally, nerds tend to have good jobs in IT or computing. Their skills are highly sought after, and there are many prestigious careers open to them. Plus, if you’re dating one you might end up with a millionaire husband!

The average nerdy guy is a sensitive, passionate and caring type. These men are intelligent and interesting to talk to. They’re non-judgmental, and you can be yourself when you are with them. Nerds will never play mind games or manipulate you, and they have a super-dry sense of humor.

Nerds like a non-pretentious woman that is not afraid to be herself. Geeky guys are attracted to compassionate girls that are quiet and sensitive. Loud attention-seeking girls are a turn-off to them. Intelligence, generosity and strength of character are qualities they look out for.

What should I get my nerdy boyfriend?

Follow your nerdy boyfriend’s passions and buy him something that compliments it. Geeks and nerds love weird t-shirts, books on their favourite subject, build-your-own kits, unusual lights, brain games, anything to do with the elements, sci-fi, history, physics, and astronomy; anything with puns or literature.

How do you tell if a nerdy guy likes you?

A nerdy guy won’t come straight out and ask you for a date. It’s more likely that they will hang in your favourite spots and hope you notice them. They’ll act nervous around you but will come alive when talking about their passions. In the end, you might be the one to ask them on a date because it’s so obvious they want to ask you out.

How do I get a nerd to like me?

Find out what they like doing and gradually get to know them as friends. Don’t jump in too quickly or you’ll scare them off. Tell them about any quirks or interests you have to gain their trust. Use text messages and social media to communicate at first as they might be shy. Go slowly and build up a friendship before you ask them out on a date.

I hope I have shown you that dating nerdy guys is the best. They have so much to offer, so why not take a chance?

You May Also Like
My Boyfriend Talks Too Much (7 Ways To Handle The Situation)
No Comments
What Do You Call Your Boyfriend? 17 Loving Nicknames You Can Use
6 Comments
9 Solid Facts About Your Clingy Boyfriend
No Comments