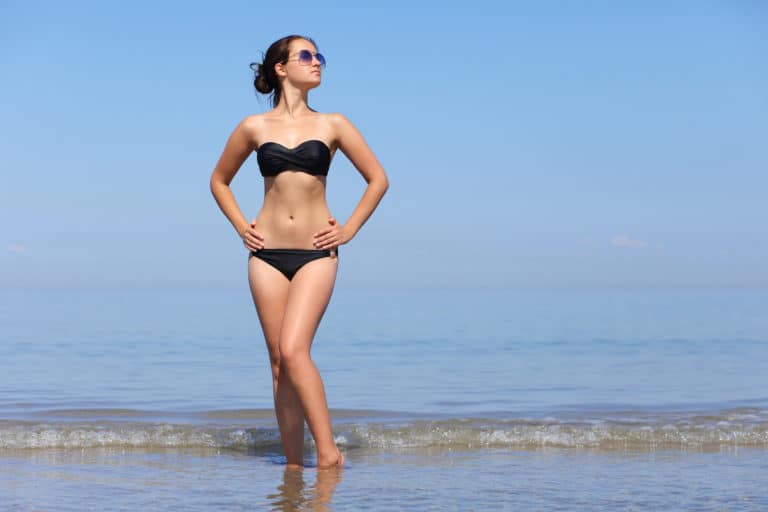 We all have our weak points when it comes to our confidence. Sometimes those weak points make it difficult for us to believe in ourselves and the fact that people want to date us. A tall woman will often have self-doubt over the fact that she is attractive as she is so often a few inches taller than other people, including some of the men that she dates.

Here, however, we explore the reasons why men like tall women and why they find tall women attractive. It will help give confidence to any taller women out there that think they are undateable due to the fact that they are too tall.

Tall women tend to have a lot of grace when they move. This comes from having naturally longer limbs that make it look like they are gliding whenever they move. This gives them a slightly angelic quality that a man will find instantly attractive. Plus, as many taller women don’t need to wear heels, they usually walk that much more confidently too as they do not have to teeter in their stilettos.

The stature that a tall woman has is another feature that makes them incredibly attractive to the opposite sex. They have a commanding presence from the outset that makes them look more self-confident - even if they are not. For a guy, being able to date a woman who has that physical stature that so many people want is a massive draw. They will want to show off their date as much as possible - simply because of their height.

It may not always be true, but it is often thought that tall people have a lot of confidence. Again it is down to that physical presence and how people literally look up to them. A lot of people will find it difficult to comprehend that taller women will have the same issues with confidence as anyone else will. Either way, a man will often find confidence attractive which is why they will want to date tall women.

Practically speaking, when a woman is tall, it can make for a good pairing with a similarly tall man. A guy who is also very tall will often seek out a woman who can match up to them as they like to make easy eye contact, they like to kiss easily and many other practical implications of both being a similar height. Height disparity may not cause relationships to end, but having two people of similar heights can certainly help in the initial stages of attraction.

Rightly or wrongly, tall women are often thought of as very independent creatures which can be an attractive trait to many a man. This is down to people believing that tall women are self-sufficient and can look after themselves, and so consequently believe that they are also very independent souls. While this is not always the case, a guy will be drawn to that appearance of independence at the very least.

Again, rightly or wrongly, a tall woman is often thought of as being ambitious. People think that ambition comes from a physical presence at times, which tall women have more easily than their counterparts. It is one of the reasons that women started to wear high heels to work - so that they could more easily match up to their male counterparts. However it happened, ambition is an attractive trait to many a guy which is why they will seek them out for a date.

Finally, it is often believed that a tall woman is an intelligent person. While this is a huge, sweeping generalization, many people believe that people who are taller are more intelligent.

Again it will come down to the belief that taller people are more confident and therefore more successful as a result. The misconception that they are more intelligent then descends out of that. Given that intelligence is such an attractive trait, it is again another reason that the opposite sex will often try to date a girl taller than average.

It depends entirely on the guy whether they find a short or a tall girl attractive - and it does not always boil down to how tall the guy is either. Some men, whether they are short or tall themselves, will find short girls attractive, whereas other men will always be drawn to taller women.

Do guys care if a girl is taller?

Some men will care if they are dating a taller woman than their own height. Some men won’t care at all. It is probably the more confident men that will not care if a woman is taller than them or not - in high heels or not.

Is being a tall girl attractive?

Being a tall girl is definitely attractive. Height is not something that any of us should worry about. The right guy or girl for you will find you attractive whatever your height or whatever the height difference is between you both. Many men are drawn to tall women, just like many men are drawn to shorter women.

What is the most attractive height for a girl?

There is no one height that is attractive for a girl. A taller girl can be a very attractive woman to some men, whereas some men will prefer a shorter woman. As a result, it is impossible to put a figure on the exact height that women should be to be the most attractive.

What is the healthiest height for a man?

There is no healthy height for a man. Some shorter men will be healthier than taller men, and vice versa. It depends on the overall fitness of the man involved and whether he has too much fat on his body or not.

Some male members of the population will actively seek out taller girls, but their reasons vary. We have highlighted a number above, but perhaps the primary reason that taller girls are often so attractive to any man is that they are believed to be confident.

So many other attractive traits are borne out of self-confidence that women who are taller than average are often seen to be self-assured and assertive. While these are mass generalizations and are often not the case for taller women, adding a few inches to your stature is something done by women the world over when they wear heels. Being taller than average is therefore something that is much lusted after by both guys and girls.