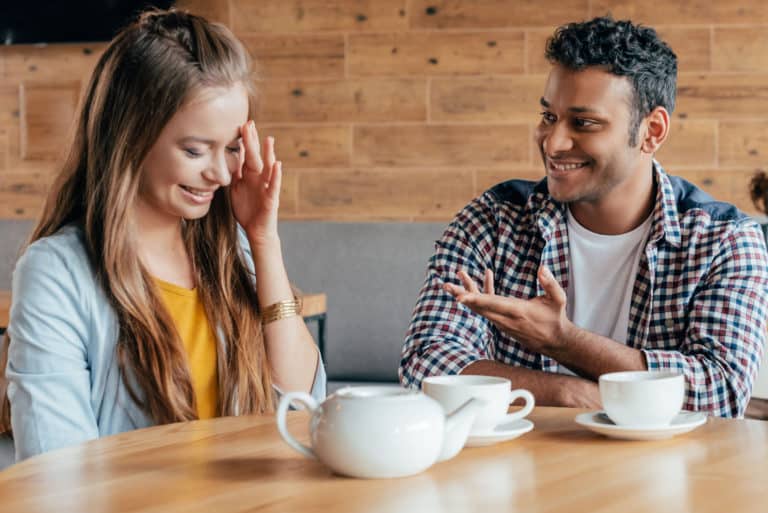 In the dating world, we often wonder what our potential love interests are really after. There are so many different characteristics that appeal to different people, that it can be hard to know whether your particular personality will be attractive to the person you like.

Here, we look at why guys like shy girls. If you are shy yourself, you may think that this character trait is a disadvantage to you finding love - given that you will not want to ever approach a guy you like to strike up a conversation with. Instead, you will always wait for them to come over to you and start talking.

For that reason, you might find that every once in awhile, a guy that you had in your sights does not approach you. However, have faith, there are plenty of reasons why guys like shy girls.

Here are 15 reasons why men like shy women. They may not apply to every man you want to get to know, but there will definitely be at least one or two that will be the case with you, your personality, and the guy you find attractive.

Often a guy will be attracted to a shy girl as they will find her shyness mysterious. They will find that particularly intriguing and as a result will want to know her better to get to the bottom of her character.

Mystery is often an alluring trait to so many people, so if you do not like to divulge all your feelings the moment you meet a person, use this characteristic to your advantage to make a guy keep asking for more.

Often shy people get lost in their thoughts, which is one of the reasons they do not speak up a lot. If this is the case with you, a guy may find you attractive as he likes your deep thinking ways.

He will therefore be intrigued to hear all your opinions on a great deal of subjects. He will like that you do not just spout any old opinion off the cuff - that instead, you take the time to form a fully-fledged knowledge on a subject first.

Shy people do not often control a conversation. In fact, they will want to listen to other people far more than they want to talk to themselves. For that reason, men might find a shy girl attractive for that good listening trait. Being listened to is what a lot of people like - to have their thoughts considered by others without being spoken over in any way.

Often, some guys will like shy girls as they will see that shyness as a form of confidence. So many extroverts out there are actually loud and brash as a way to cover up their low self-esteem. Many people see through that, which is why a guy may see shy girls as ones that actually have quite the confidence in their abilities.

The thing about many shy girls that men may like is the intrigue that comes from their quietness - what are they hiding? What are they really like? But, also when they do start to open up, men will find that interesting as a consequence. They will want to listen to when a shy girl starts talking about her experiences and her past.

Given that shy girls are often naturally good listeners, they also tend to have a sweeter disposition than more outgoing girls. That is not to say that outgoing girls cannot be sweet, it is just that shy girls will most likely have the mentality to think of others that much more easily as they are listening to their friends more readily than an extrovert can ever have the time to do.

Another reason that men may like shy girls is that they can be seen as independent. This is a natural consequence of guys thinking that shyness can come in confidence in their own abilities.

Shy people also naturally have to be that much more independent in their activities as they are less likely to arrange plans with friends or acquaintances. Independent individuals are very attractive to some.

On the flip side of being seen as independent and confident, some men may interpret a girl’s shyness as being meek and mild - and a bit fragile as a result. For some guys, that is very appealing as they want to be the strength in that woman’s life.

Almost like her savior. Whether or not that woman is fragile or not will depend on the individual involved, it can be why men find shy girls attractive.

Another common thought about a shy girl over outgoing girls is that they are far more feminine. This is down to their quieter dispositions that do not have to look for the attention of others. As a result, they seem less boisterous and therefore more feminine as a result.

Whether this will change over time when gender equality becomes more balanced remains to be seen, but some old school guys out there may well still see quieter women as the more feminine examples of their sex.

For the same reason, some men may see a shy girl as one that still seems to have a great deal of innocence within her. Innocence is a trait that some guys will find appealing - and not just for virginal reasons. They will simply find it endearing as a result will see a woman’s shyness as an attractive trait.

More outgoing women may well be putting on a bit of a forced show at times when out with friends and acquaintances. A shy girl is one that when she does speak up at gatherings is more likely to be more natural.

Men may find this attractive in a shy girl as they feel they know exactly what they are getting when they start dating them. This is because they won’t have put on a front when they first met.

Thanks to often being a good listener, guys may want to date a shy girl as they tend to be supportive too. This is because they have managed to take on board what their love interest has said and really listened to how they are feeling.

Those that are more concerned with performing or are simply taking a larger part in any conversation, will minimize their chance to speak listen to their date. They will be in less of a good position to support their love interest as a result.

Again, being able to listen to others will give them an informed point of view that helps them be that bit more determined.

Shyness also gives people time to understand others as well. By hearing and watching others more than actively being involved in some conversations or situations, they will have time to fully understand a person’s character and point of view. Understanding is a powerful trait to have which is why so many men actively pursue shy women at times.

Kindness is a virtue and it is a trait that often goes hand in hand with shyness. It is due to the patience that shy people have by being that little bit more reserved in their dealings with others.

It allows them the ability to stop and take on board what a person needs without that person having to outwardly say so. Kindness is what so many men will love to have in a relationship which is why men do so often like shy women.

Is being shy attractive?

Being shy can be attractive to some people. For some, they will find it an endearing quality that will be hard to resist. Additionally, some people like the reserved nature that so often comes from being shy too. In fact, many extroverts are very much drawn to it.

Guys definitely like small girls - if that is what they are into. Not everyone lusts after a tall, willowy limbed model. For some guys, they will like their women petite with a diminutive stature. There are lots of different reasons for different guys liking small girls, but they’re definitely is a common want for them!

Different guys like different things from girls. Some will like shy girls while others will far prefer outgoing girls. It can be tempting to try to appeal to a guy we like by changing our personality if we can, but often once we get to know a potential love interest, our true character will eventually come out.

What age is the most attractive?

Different ages are attractive to different people. Depending on the guy, women in their 20s may be the best age, while some men like women who are much older as they might want experience. Whatever age you are, you need to have confidence in yourself and know that there is a guy out there for you.

What do guys feel when they hug a girl?

Every guy will feel differently when they hug a girl. To some, this type of body language is mundane and very much in the friend zone. To others, it may be the start of showing them their true feelings and instigate a more tactile relationship between them.

It can be so easy to convince yourself, if you are shy, that a guy would never pick you over a more outwardly confident or extroverted person. However, that is not necessarily the case.

There are so many traits that go hand in hand with being shy, that men will often seek out a shy woman. Above all the qualities that you do have, you should take confidence in. Remember, unless you love yourself, you can’t expect someone else to either.