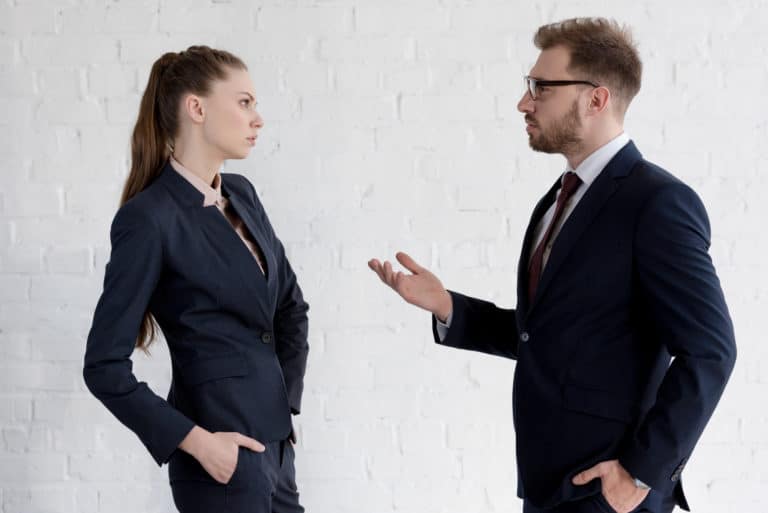 How To Deal With Mansplaining (9 Easy Ways)

Mansplaining is something we need to talk about more often. As a woman, there is every possibility you have been a victim of it. I have been there, so I understand that dealing with a mansplainer can be tough.

Mansplaining is when men explain things to women in a very patronizing or condescending way; in most cases, the mansplainers actually lack the expertise that you have. They probably know you are the best in the game, and they need you.

Mansplaining can happen to anyone, anywhere, and at any time. Most women often receive this from their bosses from work or even at home from a partner. Quite frequently, some men speak to women in a very condescending way, but might not realize it.

There is every possibility that this will keep repeating itself if you don’t decide to shut down mansplaining every time it comes up. Whenever you are caught up in such a conversation, you need to stand your ground because such men will take you for granted if you don’t find a way to stop them. Ever thought of how to respond and deal with such situations?

Here is how you can deal with mansplainers.

9 Ways To Deal With Mansplaining

Remember, anger won’t get you anywhere. As much as they need to be understanding, so do you. In other words, if you can't control someone's actions, then try controlling yours.

That being said, if he still constantly places his authority higher than yours, it would help if you reacted in an empowered manner that still doesn’t spell anger. You can’t be a piece of rag that gets trampled on every day. So, understand how to balance your reactions.

Look within yourself and pay attention to your words. Instead of giving a reaction immediately, calm down and observe the situation and how it made you feel. No doubt, you might be thinking, "Does this guy actually think I am an idiot? However, as noted earlier, it’s best not to react harshly because he might not realize his faults.

Rather, just observe your emotions and feelings. This will help you deal with such men. After making sense of both your feelings and the situation, try to tackle the issue immediately, so you don’t regret doing anything.

No doubt, mansplaining is condescending and arrogant behavior. This sense of entitlement some men have sucks a lot. Once you’ve analyzed the situation and how it made you feel, call out the mansplainer because like I said earlier, he might not be aware of his behavior.

Confront him one-on-one. You might be shocked to find out that he had no idea he was doing that, and a positive change might just occur from this realization. Very likely, the mansplainer will also get defensive. If that happens, don’t back down. The more you talk about it respectfully, the better the results.

Instead of getting angry, you can first explain to him what a mansplainer is and get him to understand what he is doing. Tell him about the effect of his behavior and how hurtful it can get. This is a very effective method because education is vital for positive change to take place. When a person knows how their attitude is harmful to others, they’ll likely change.

Also, try to give detailed examples of what mansplaining is exactly so he can see where he is guilty and fix it. When you are done educating him, and he still acts defensively, then it is better to give him space to think about his actions.

Asking questions is also an effective way to shut down a mansplainer. However, make sure you have adequate knowledge of what you are going to talk about. Ask the mansplainer questions like “What do you know about being mansplained?” “What do you hope to accomplish by giving me your expertise?” “ What qualifications do you have to qualify you to talk to me on this issue?” “Do you have any personal experience that you can use as an example to explain the topic to me?’’

Your interest in learning about these things is a good step against mansplaining. This could make him feel a bit inferior and probably come back to his senses.

6. Get help from friends

If you have experienced mansplaining, there is a high chance that your female friends might have also experienced it. Do get your girls together so you can plan a resolution. Women are powerful, and the bond is even stronger when they come together with one goal.

So, plan a girl’s hangout where you can all discuss mansplaining. And if it is rampant amongst you (whether in your workplace or at home), then sensitivity training should kick off.

When women come together, there is more chance for success and you can all lean on each other. Also, try to use as much humor when trying to solve the situation with friends. It shouldn't be a man-hating tea party. Remember, you want to improve your relationship with others for a positive change. So, always try to stay on topic when seeking help from other women.

Ever heard the saying silent is the best answer given to a fool? If you have tried calling him out and using other measures to change the situation, but nothing is working out, it’s time to completely ignore the mansplainer.

Just disengage when you realize nothing can be done about it. Let him speak to your foot girl. Ignore every single word he says. Never let the words of men get to you. Build your walls high enough that his words won’t affect you in any way. But if you are not strong enough to receive his words, then avoid him completely.

8. Look for help on online forums

You can check only groups and forums for help. Although these eradication schemes may not be available to everyone if it’s available to you, then you can report and receive advice. These men just don’t understand that even if they are experts, the woman could be one as well.

Create public awareness so people can know. If this takes place in your office too often, men will start relating to women differently. Let the men know what they are guilty of so they can change those dynamics. This will also help other women to stand their ground and hold on to their opinions. This is very important, but it is neglected by so many.

How can you tell Mansplaining?

When having a conversation with you Mansplainers make you feel you have done nothing right. They tend to try to reduce your self-esteem. They talk very fast and feel they are bigger than you.

What is it called when a man talks down to a woman?

It is called Mansplaining, and most men intentionally do this. He speaks so condescendingly. He brings unreasonable explanations just to make sure you understand the problem he is pointing out. However, in most cases, you are capable of solving the problems, and he is very much aware of it.

This is when a woman believes she is right when having a conversation with a man. She wants to make sure you see things from her point of view. She could go on to explain as long as it takes, even when you don't demand an explanation from her.

What is the difference between patronizing and condescending?

Condescending is when a person feels and acts more superior than you. They treat people like they are inferior to them and always want to prove a point. Patronizing is similar to condescending but in a disguised form. They treat you in a kind way that indicates a feeling of superiority.

What to do if someone talks over you?

Speak up immediately, but if the person isn't willing to listen to you at that point, then let them have their way. However, make sure you approach them and let them know you are not comfortable with how they talk to you.

I hope you found this article helpful. Remember, mansplaining is not a gender issue. Rather, it’s just a misunderstanding that stems from cluelessness and pride. You must be confident if you want to deal with mansplainers. Never let them think you are inferior, so make sure you build your self-esteem first.

Let me know what you think, and please don't forget to share this article with others.

You May Also Like
He Doesn't Make Me A Priority (15 Vital Things to Do If You Feel Left Out)
No Comments
Should I Forgive Him? (9 Careful Ways)
No Comments
My Boyfriend Isn't Romantic (11 Tips To Manage The Situation)
No Comments