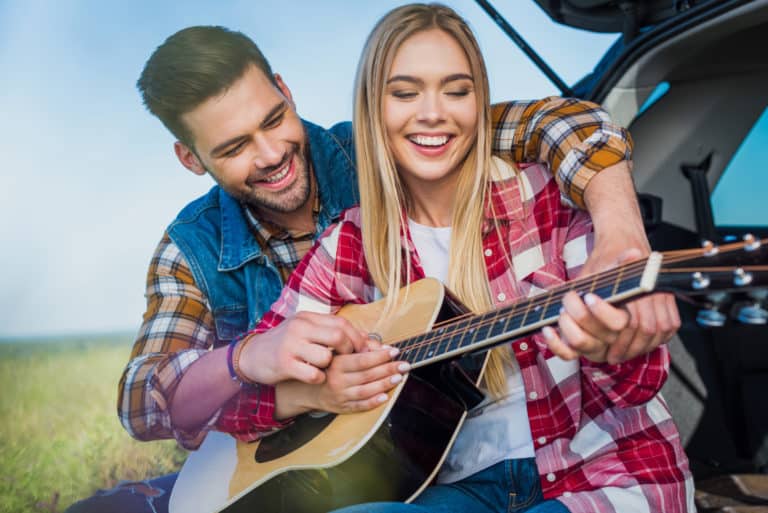 These two signs are quite an unlikely match, they’re different from each other in so many ways. Aquarius is an air sign and a man with this sign is ruled by his intellect, he’s not easily moved by his emotions nor does he base his decision-making on them. He’s very social, adventurous, somewhat rebellious, and loves his freedom.

Cancer, on the other hand, is a water sign and therefore, a lady with this sign is ruled by her heart. She’s very in tune with her emotions and tends to be quite intuitive. She has a very nurturing, motherly nature and is sometimes perceived as bossy because of this.

Aquarius and cancer compatibility isn’t one many people bank on, but the few who love one another often stay together for a long time. One of the major things these two signs have in common is their determination.

The Aquarius man is adaptable and a bit flexible, he hardly gives up on anything he sets his mind to do. Also, the cancer woman’s motherly nature makes her quite patient and forgiving, she will fight to make any relationship work.  With that being said, let’s take a look at their compatibility traits.

They may find one another fascinating, yet difficult to understand. However, these two have the chance at a great and long-lasting friendship since the love and care she is ever willing to share is secret what type of woman Aquarius man craves.

The Cancer woman’s sensitivity makes it easier for her to pay attention to detail, something that isn’t the Aquarius man’s strong suit. However, they would make great business partners, project partners, work partners, etc. especially when they’re heading a team of large numbers.

They are able to make complex and massive projects a reality as a duo, which usually lands them in managerial positions at work. Nonetheless, communication between both signs is not the best, they both struggle to understand each other's tones and meanings.

The Aquarius man loves his freedom and will do anything to protect it. This is one thing the Cancer woman finds hard to understand. She’s quite possessive and prefers a more structured and family-centered life. However, the man is more of a free-spirit, he tries to show her this by giving her as much freedom as she wants. It's often quite hard for her to reciprocate though.

If they both meet each other in the middle; the man would be able to tame his wild side while the woman cuts loose a bit and explores her adventurous side, this way they’d have a chance at a great bond.

The Aquarius man is very idealistic, humane, and principled. He loves to break free from prejudice and certain rules he considers superficial. However, he often struggles to express his inner feelings. His way of communicating is very different from the way everyone else expresses themselves.

His distant nature can sometimes hinder his chances of bonding emotionally with a person he loves. The cancer woman, on the other hand, is a strong motherly figure. She loves to nurture and protect her loved ones.

She has no problem expressing her affections in a relationship but her motherly nature can sometimes drive her to ‘parent’ the people she cares about.

A marriage between an Aquarius man and a Cancer woman is very unlikely. However, if they’re able to get past their differences then they’re likely to have a lasting and successful marriage. They will have to work extra hard on their communication skills and try their best to avoid misunderstandings.

The Aquarius man’s determination is often what increases the longevity of their marriage. The Cancer woman is also a very devoted wife; in fact, this is her strong suit. The wife in her would do anything to make her marriage work, even though it means making compromises from time to time.

These major traits in these signs are what may likely make their marriage successful. It would be better for both of them if they have children. That way, the cancer woman would have an outlet for her maternal instincts.

These signs are better off as friends, as there’s bound to be a handful of misunderstandings in their relationship. The woman will definitely be a loving, caring, and nurturing friend. She will cater to all his emotional needs and his cravings for affection. However, the Aquarius man is a free and social spirit.

He will give his lover all the freedom she needs and expect the same from her. The Cancer woman’s sense of humor is very well appreciated by the man and he enjoys her company when she’s not smothering him with her motherly energy.

Another thing that draws Aquarius to Cancer is the fact that she’s constantly changing her life routine, also the fact that she knows how to really care. The Cancer woman’s periodic mood swings may baffle him initially, but his adjustable and adaptable nature will learn to live with it.

7. Aquarius man and Cancer woman in a relationship

The love affair between these signs is a really rocky road for both. However, if they’re determined to understand each other, they can eventually balance their opposite personalities out. The good thing is that both signs love change and like to shuffle their routine from time.

Cancer’s changing moods, however,  are prone to agitate Aquarius but in turn, he surprises her with his spontaneity periodically. The Cancer woman prefers a  private and discreet life while the man is very open and out there, he’s the PDA type of guy but the woman will be very reluctant in this area.

Though the man is principled, restrictions like these would make him feel caged and limited. This is the complete opposite of what he wants in a relationship, he prefers the adventurous, ‘go with the flow’ type of life and is likely to influence the woman in this area if she’s willing.

Being an air sign, he handles everything as if it's a mental exercise, including sex. The woman on the other hand views sex as an emotional activity, meant to bring two lovers closer to each other. Their communication challenges will also cause a lot of friction in this area.

She will have no problems communicating her needs, fantasies, and even giving feedback on what she wants and doesn’t want as a woman.

He, on the other hand, will struggle to express himself; letting her know what works for him will be like rocket science to him and this may make their lovemaking experience very awkward and unsatisfying. For these reasons and many more, these signs are not very sexually compatible.

Can a Cancer woman and Aquarius man work?

Yes, these signs can work, but it's very unlikely and tends to be rare. Relationships between these two signs are filled with many misunderstandings and usually, they start right from the initial stages. With a Cancer woman, Aquarius man will struggle to communicate. Likewise, she will struggle to understand him as well.

Can an Aquarius man fall in love with a Cancer woman?

Yes, an Aquarius man can love a cancer woman and vice versa. Cancer is a water sign, therefore the cancer woman is ruled by her heart. She is prone to falling in love easily with a man who cares for her and treats her well. When cancer and Aquarius get involved, they do not get separated easily, they try their best to make it work.

Are Aquarius and Cancer a good match?

They aren’t the regular perfect or compatible love-match, but they’re a very determined pair. The best thing about this match is that they both fully support each other, the cancer woman is kind, caring, and forgiving. Although Aquarius takes a while to return the affection, Cancer is always ready and willing to shower him with love.

What attracts an Aquarius man?

The Aquarius man is quite hard to pin down, as he loves his freedom more than anything. However, when he has his sights set on the lady he loves, he knows how to shower her with affection. Being the creative, intelligent, rule breaker that loves to try new things, he craves a partner who can match this energy.

How do you know if an Aquarius man is serious about you?

Aquarius men hardly connect with ladies they are not serious about, but a clear sign of this is if he’s being a friend to you. If he always makes himself available when you need him, this shows that he really is into you. You’d also notice that he talks about the future frequently.

I hope you enjoyed this article. If you are a Cancer woman and you have your eyes on airy Aquarius, you have no reason to hold back, just be determined to make it work. Please let me know what you think about this topic in the comment section below and be sure to share this write up with your friends.