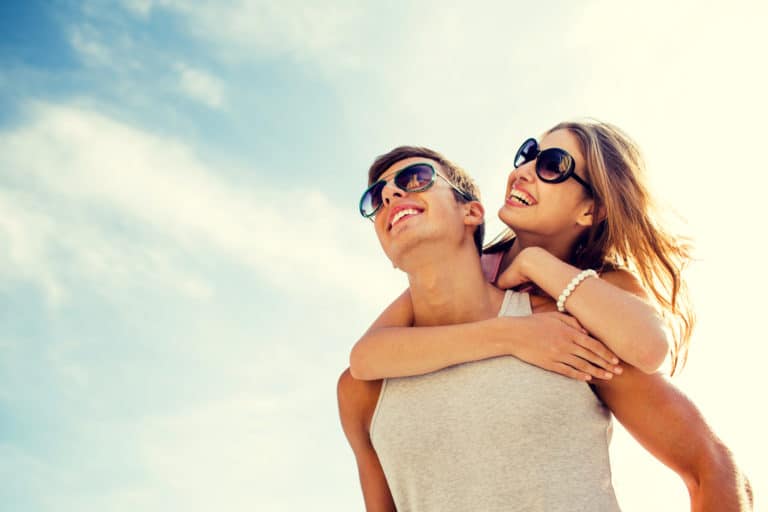 Of all the star signs in all the world, Aquarius man and Aquarius woman just happen to accidentally cross paths with one another. They fall instantly in love and live happily ever after.

Now, you might think that is one hell of a far-fetched story, but we are talking about Aquarius here. For this zodiac sign, the far-fetched and extraordinary are normal for them. So I would ask you to keep that in mind throughout this article.

Before I talk about the compatibility between Aquarius and Aquarius let’s just remind ourselves of their characteristics.

Despite being an Air sign, Aquarius is symbolized by the Water-bearer. Ruled by Uranus, the planet of sudden change, Aquarians are a Fixed sign. This means they get things done; they are the workers of the Zodiac.

For Aquarians, everything goes on in their heads. They analyze, ponder, dream, and create in their minds. Aquarians accumulate knowledge and have a need to communicate it to others.

They are rebellious and flout authority as they do not believe in the strict rules and codes that society has laid down. They encourage change in others however, they can be unwilling to change their own behavior.

Aquarius is a visionary humanitarian, with compassion for all human beings. This sign is a forward-thinking, innovative future-focused sign. It wants to do away with old stereotypes and blast in new ideas that benefit everyone.

Now, what happens when an Aquarius man and an Aquarius woman meet? What is the Aquarius and Aquarius compatibility?  Let’s find out.

Can Aquarius And Aquarius Be Together?

As with all the star signs, there are pros and cons associated with dating the same sign.

1. They are both outgoing

Aquarius is the ultimate extrovert. Can you imagine the two in a relationship? Aquarius man and Aquarius woman feed off each other’s natural self-confidence and give the other a massive boost.

Aquarius guys are charming and witty whereas Aquarius women are flirtatious and fun to be around. Put these two together and be prepared for some seriously funny banter.

This is one of those star signs that won’t cause a fuss if the other person wants a weekend away with the lads. Aquarians do not get jealous, they are not possessive over their partners.

They trust each other and don’t worry when their loved one is not around. Because their freedom and independence are so important to them they instinctively know what it means in the relationship.

Of course, people born under the same sign are likely to share similar if not the same values. But we have to remember that these values also include a fierce need for freedom.

So what happens when both Aquarius man and Aquarius woman crave their independence from their partner? Will they be equally understanding? Actually, yes. Aquarius is more than happy to give their partner space.

4. They love learning about new things

It really doesn’t matter what an Aquarius female or Aquarius male is interested in, just so long as they have interests. Aquarians want you to have a passion, an opinion, a point of view. Why? Because then they can discuss it with you.

In fact, this is one of the things that attract Aquarius man to Aquarius woman in the first place. Remember, they are always gathering knowledge, picking up new bits of information. They are like sponges, soaking in facts and figures.

There is definitely something you can say about Aquarius men and women and that is that these two are not particularly tactile creatures. This is quite a detached star sign, both emotionally and physically. Don’t forget, everything happens in their heads.

However, intimacy and sex aren’t all about looking deeply into your partner’s eyes while you are making love. This is the sign that likes to experiment sexually. They may use fantasies or role-play to connect sexually with one another.

6. They instantly understand each other

The amazing thing about these two is that they immediately click. When they start talking they instantly recognize a kindred spirit. Their minds go off in tangents and typically people cannot keep up with them.

However, now they have found a person that not only keeps up but matches their thought patterns. They may even get to the stage where they are finishing each other’s sentences.

1. They can be stubborn

Belonging to a Fixed sign means that both Aquarius man and woman have something of a stubborn nature. They will dig their heels in and refuse to budge if they believe they are in the right, which, of course, both of them will believe.

The other problem is that they will do everything in their power to change their partner’s mind, whilst refusing to listen or change theirs. This is both infuriating and frustrating but imagine two people doing it at the same time?

2. They will not compromise

Along with a stubborn nature, Aquarius is renowned for being unable to compromise. They are more likely to walk away, even from a serious relationship, than give an inch.

When an Aquarius man or woman thinks they are in the right nothing will persuade them to look at the other person’s point of view. They may well go over the conflict in their head a thousand times, but they’ll get no closer to resolving the issue in real life.

3. They are reluctant to commit

Most Aquarius men and women start off their relationship as very good friends. This leads to romance and sex, and then, well, nothing usually.

It is true that the Aquarius man and Aquarius woman find it very difficult to commit to someone.

There is something about the permanency of either moving in together or getting married that scares Aquarius.  It doesn’t matter that they have fallen in love with another Aquarius, they still value their freedom too much.

4. Their egos can clash

Aquarians are natural extroverts and as such, have huge egos. They like to stand center stage, to be the life and soul of the party. They want the spotlight on them.

So what happens when you have two Aquarius people in a relationship, both vying for attention? Someone usually has to back down and allow the other to be the focus. Well, have you ever asked an extrovert to stand aside and shine the glory on someone else? It doesn’t go down well.

5. They can fall into the 'friend zone'

There is a real possibility that two Aquarians will fall into the trap of becoming good friends. Aquarius man and woman share the same traits when it comes to emotions.

They are not tactile, they can be aloof and this leads to them becoming comfortable in each other’s company. The way Aquarius man Aquarius woman can stop this is to be spontaneous and surprise each other to keep the excitement going in their relationship.

The major problem when it comes to an Aquarius man Aquarius woman compatibility is their moods, or specifically, how they match up. They belong to an Air sign which means that one of them can be as calm as a warm summer’s day, whereas the other can be blowing as fiercely as a hurricane over the Pacific.

Don’t forget that this aloof sign will only be concerned with what is going on inside their own head. They may not even live together because they are afraid of commitment and they are not keen on public displays of emotion. So they may not even know what their partner is feeling. This is not a recipe for a healthy relationship.

Can Aquarius and Aquarius be together?

Aquarius woman and Aquarius man make a good couple as they share common interests and think the same way. They don’t tend to be tactile lovers but like to experiment sexually and have to have their own freedom. They do not get jealous, in fact, they are very trusting of their partners.

What kind of woman does an Aquarius man like?

Aquarius guys love independent women who have their own interesting lives and do not restrict their freedom. These men want to be stimulated by their partners, not held back. They are non-judgmental, compassionate, and invested in making the world a better place. So they are searching for like-minded partners.

Can Aquarius fall in love?

Aquarians might need their freedom but this doesn’t mean they can’t fall in love. They tend to have a lot of very good friends but occasionally one of these friends will cross over into the lover zone. This person will have to be very special indeed.

Who is Aquarius sexually compatible with?

Sagittarius is a great match as it is as independent as Aquarius and does not place as much emotional importance on sex as other star signs. Libra has a calming effect on Aquarian’s spontaneous nature whereas Gemini stimulates their intellect.

Aquarius is sensitive, sensual kissers who are not afraid to experiment and surprise you. However, if you are looking for sheer passion and a hotblooded smooch that takes your breath away then head for Aries of Scorpio.

Are you an Aquarius man Aquarius woman in a relationship right now? If so, what do you think of my take on things? Do you agree or disagree? Whatever your opinion I would love to hear your comments. And please feel free to share this article if you enjoyed reading it.