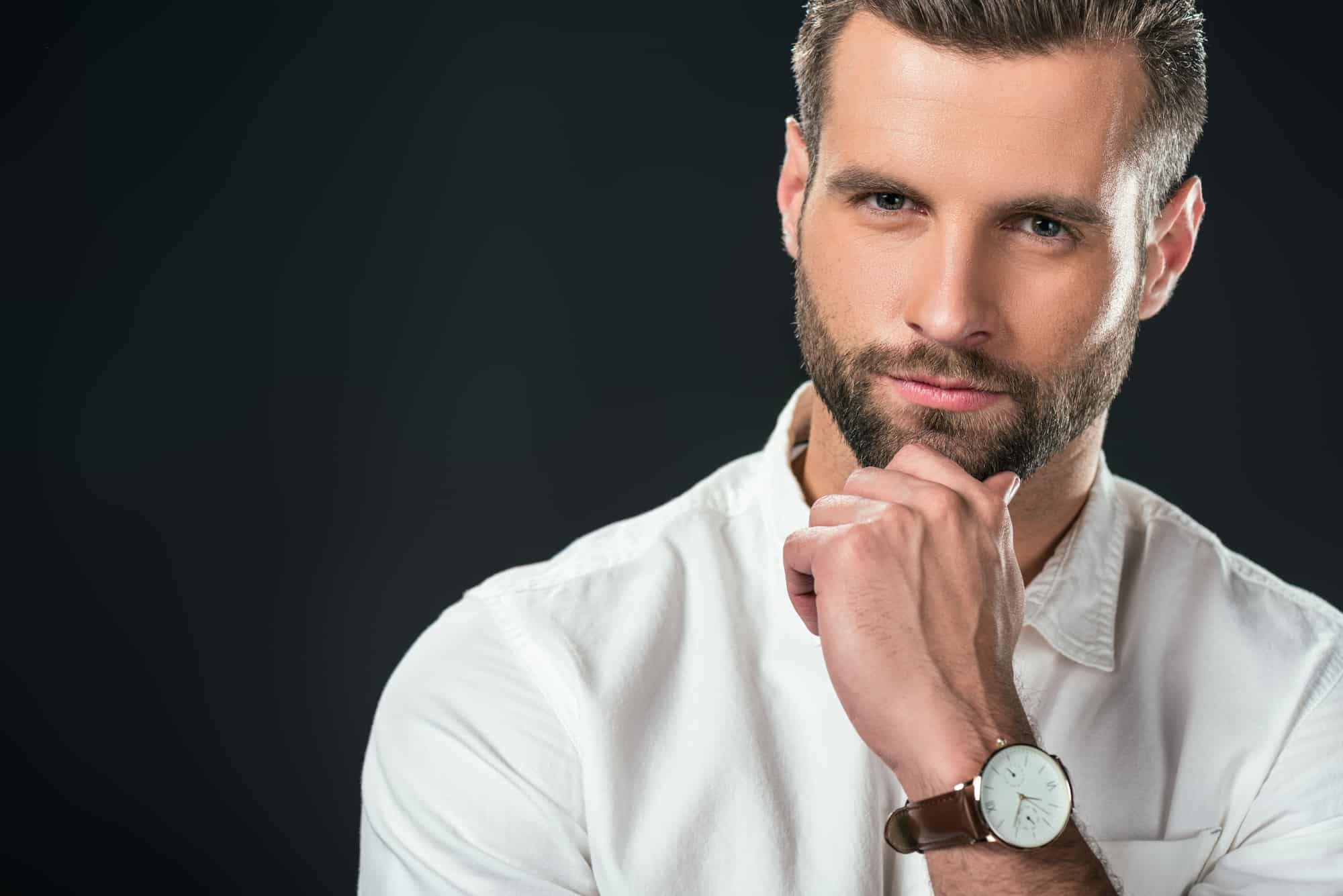 Do you like eccentric, intelligent guys that stand out from the crowd, are compassionate, with a sense of justice, and a thirst for knowledge? If the answer is yes then let me introduce you to Aquarius man.

I remember my first encounter with an Aquarius man. He came up to me in a bar and said "It would be a crime if we didn’t go out with each other". It was back in the days of punk rock and against the fashion, he wore a tartan shirt. He looked like a library assistant.

I was instantly smitten. There was something beguiling about him. He defied convention. He trod his own path. And that, my friend, is an Aquarius man.

In order to understand Aquarius, it is important to examine the particulars of his Zodiac.

Air signs are the communicators and the thinkers of the world. Imagine them throwing up ideas and concepts into the air, working out the answers in their own mind.

Air signs are curious intellectuals who see their role in life as educators. They are objective individuals who are idealistic and strive to help others.

Uranus is the planet of sudden and drastic change. It is associated with the invention, scientific innovation, and discovery. It is also related to uprisings and rebellion.

Any radical shifts in thinking or world strategy can be afforded to Uranus. This planet forces us to change our attitude, our mind, our life, and our way of thinking, reforming ourselves.

What Is The Personality Of An Aquarius Male?

Whatever you say Aquarius man is never intolerant. This is one Zodiac sign that defines the word liberal. He is non-judgemental, sees people for who they are, not what they are. He has a well-balanced view of the world and is able to see both sides of an argument.

It is not surprising, thanks to their ruling planet of Uranus, that Aquarius is prone to spontaneity or impulsive acts. Actually, trying to pin Aquarius down is like trying to catch air in a butterfly net. Aquarius is the definition of impromptu or spur-of-the-moment.

Some Aquarians are obviously bookish nerdy types but not all. I know an Aquarius man who is a devoted football supporter, in fact, he is a season ticket holder yet loves Beethoven and reads Thomas Hardy at the weekend to relax. Aquarians soak up knowledge like sponges.

Aquarians march to the beat of their own drum. This means that very often they’ll wear clothes that are not in fashion, they’ll like music that is not in vogue, basically, they like what they like and to hell with the rest of us.

Think of them as your crazy cousin with the dyed blue hair who skateboards to college with an old-fashioned Walkman because he loves the crackling sound the cassettes make.

You may think that Aquarians are a bit shy when you first meet them but don’t be fooled; they are simply sizing you up. Aquarian men never do anything they are not happy doing. In fact, they can have quite a temper when provoked. Especially if you are restricting his freedom in some way.

There are some star signs that crave the love and partnership of a family unit. Take Cancer or Pisces man for example. These are dedicated and loving family-orientated men. On the other hand, we have an Aquarius man. He is not quite as independent as Gemini or Aries, but he does value his freedom.

Uranus may be the planet of innovation, science, and technology but Aquarians are also incredibly creative too. This can manifest itself in a number of ways, from wearing weird and outlandish clothes or dyeing their hair rainbow colors to working in a creative field.

If you do happen to be lucky enough to bag an Aquarius man then one thing you will never have to worry about and that is him cheating on you. Aquarius men have such an inbuilt sense of justice that they find it virtually impossible to cheat on their partner.

I say virtually. We are talking only about the Sun Sign here. If he has a moon in Gemini or Scorpio that’s an entirely different matter.

Can’t make it to the party? No problem. Going to be late for his graduation? He understands. Your ex is coming over for a study session? That’s fine with him. Believe it or not, these are all actual conversations with an Aquarius man and his replies. You see, Aquarius men are so trustworthy themselves they believe everyone else is.

Aquarius has a very strong sense of justice and cares, not only about the plight of others but of the planet and animals. As a result, you’ll often find them campaigning on behalf of charities for green projects or living alternative lifestyles.

We already know that Aquarius is an Air sign so it’s not surprising to learn that the Aquarius male is analytical in his approach to reasoning and thinking. He uses logic to deconstruct ideas and theories before arriving at his conclusion.

Aquarians are forward-thinkers, again, this is thanks to Uranus. Their ruling planet gives them the power to easily see the bigger picture. Moreover, they are a fixed sign which means that once they have a theory they’ll get working on it immediately.

Aquarian males often talk of what their ‘ideal world’ looks like. This relates to their visionary ideas and sense of social justice. They have big plans for the world, where everyone has enough food to eat, shelter from harsh conditions, people and animals are treated with respect and love.

If you want an honest answer to a question just ask an Aquarius male. He won’t beat around the bush and he won’t sugar-coat it either. However, be careful, he can come across as a little condescending at times. This is because he thinks he’s always right, but then again, don’t we all?

Aquarius man doesn’t like restrictions of any kind, whether it is physical, mental, or financial. He needs his freedom. This can mean space to be alone from time to time, or traveling or earning enough money to live the kind of life he wants to live. It can also mean, however, not committing fully to a relationship.

How To Attract An Aquarius Man

Now that you know more about the personality traits of Aquarius, you might want to know what Aquarius man likes.

Aquarius man in love is not like other male star signs, so you can throw away your Zodiac playback. Aquarius men do love sex, just like any other red-blooded male. However, what attracts an Aquarius man is intelligence, passion for a particular subject, knowledge for a topic.

Aquarius loves to learn. They also love to impart their knowledge to anyone who is willing to listen. Stimulating their mind and engaging in interesting conversations win the heart of Aquarius.

Aquarius men need love just as much as any other star sign in the Zodiac, but they don’t have this pressing need to start a family or settle down. As a result, they are attracted to independent women who are confident in their own lives.

Aquarians are not looking to complete someone, they want a person who is already complete. They feel whole and well-rounded themselves. So they are looking for an equal to match their intellect and their confidence.

Nothing turns off an Aquarius male than a person who is closed off to suggestion. They cannot tolerate intolerance, especially when it comes down to people of different cultures, races, or gender.

But not only that, Aquarius is the very definition of new ideas, innovation, discovery, and change. If they love the art they’ll be drawn to abstract, not traditional works. If it is the literature they’ll seek out new writers rather than read the classics. But remember, as, with all-star signs, we have character traits in other signs as well. So bear this in mind.

How do you know if an Aquarius man loves you?

You’ll know because Aquarius men are upfront and honest about their intentions. But even if they don’t tell you outright, the amount of contact they make with you should be a huge giveaway. They’ll be the ones initiating contact and arranging dates to meet up.

What attracts an Aquarius man?

Aquarius men are quirky, unconventional types with a big capacity for learning. He appreciates an equal to his intellect and someone who is independent and confident. Shrinking violets need not apply.

Can I trust an Aquarius man?

Yes, they are not known for being manipulative or cunning. Aquarius are trustworthy because they believe in justice and have compassion for others.

What are Aquarius known for?

They are unconventional, free-spirited, intellectual people who dislike being restricted. Aquarius is associated with change, innovation, and discovery. These are the doers, the intrepid explorers who dare to boldly go, well, you get the picture.

What does an Aquarius man want in a relationship?

Above all, Aquarius wants a partner who is his intellectual equal. You can be the most beautiful, sexy woman in the world, but this won’t turn his head. However, if you can debate on his level that will definitely float his boat.

Are you dating an Aquarius man or are you in a relationship with one and you want to find out more about him? Did my article help you in any way?

If you enjoyed it please feel free to share it with your friends.

You May Also Like
Does The Pisces Man Cheat? 5 Signs He May Be
10 Comments
How To Attract A Sagittarius Man (13 Surefire Ways)
1 Comment
Aquarius Man And Virgo Woman Compatibility In Love (12 Opposite Personalities)
No Comments