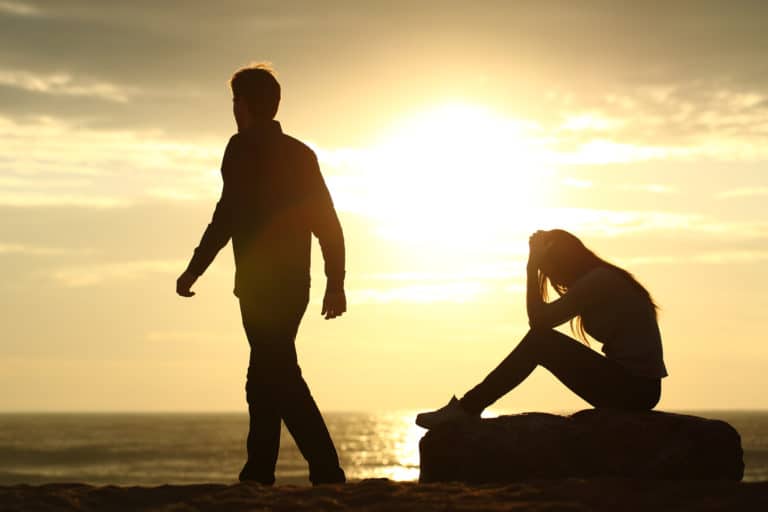 Taurus Man Break Up (Why and How To Cope)

Taurus men are loyal, loving, and committed in relationships. But how does the Taurus man react after a breakup? If you’ve recently split from your Taurus guy you might want to know how he’s feeling.

Taurus is the second sign of the Zodiac and as such, finds comfort in the familiar. Family and friends are important to this sign.

Taurus is an earth sign and this is evident in Taurus men especially. These guys are solid and dependable. They won’t mess you around with mind games. If they like you you’ll know it.

They’ll want to settle down with you and make a life with you. They are sensitive to your needs in a sensual and grounded way. You become their best friend.

Taurus is associated with material things. Taurus gets pleasure from owning things. They are also connected with the senses of taste, touch, and smell. Physical contact is therefore important to them. To Taureans, love means physical affection.

Taurus men have strengths and weaknesses like any other Zodiac sign. Sure, they might be strong, faithful, and reliable, but they can also be stubborn and possessive. And, because they like routine and security, dare I say it, a little bit boring.

They also don’t like being told what to do. These guys are independent and go their own way. They’re perfectly happy with you coming along, so long as you follow their lead.

So if Taurus men love the security and are loyal partners, what would cause them to break up the relationship? And will Taurus man come back after break up?

What Causes Taurus Men To Break Up With You?

1. You cheated on him

For the Taurus man, cheating is the one thing he can’t forgive or forget. For a start, it reflects badly on his love life, and second, this man would die for his friends. So you can bet he rates loyalty very highly.

A cheating partner is the ultimate deal-breaker for him. No excuses, no second chances. Cheat on a Taurus man and you’re out.

2. You’re too spontaneous for him

These guys like security, the mundane, and a routine to stick to. They like to plan things in advance. They don’t like surprises and they never act on impulse.

Whilst they might have been attracted to your zest for life and adventure at the start of the relationship, they would have expected you to settle down by now.

The Taurus motto is ‘I have’ or ‘I own’. So it’s hardly surprising to learn that one of Taurus man’s weaknesses is that he likes to be in control of his women. There are going to be problems if you are an independent woman with no intention of being controlled by any man.

You could have fallen for his sensual charm and strong earthly kindness. But now you’ve got together you realize that in fact, he’s a bit of a male chauvinist when it comes to women in the 21st century. Trouble is, he’s realized too and broken up with you.

Why Would You Break Up With A Taurus Man?

Of course, it takes two to break up. So here are some reasons why women break up with Taurus men.

You might ask yourself why does Taurus man keep coming back? Well, they sure do love their routines, and for some women (Capricorn or Virgo springs to mind) this suits them down to the ground. But for others, it becomes claustrophobic and restricting.

If you are more of the impulsive type Taurus man will drive you mad with his insistence on planning everything.

Once you’re nestled under a Taurean wing don’t expect to look out from under it at other men. Your Taurean guy is purposely shielding you from the dangerous glare of wicked men who only want one thing.

Women with a flirtatious nature need not apply. You’ll get twenty questions when you get home. Most women can’t handle this kind of behavior.

Taurus is the sign of the bull. The bull typically digs its heels in and won’t be moved. For these guys, it’s either their way or the highway. You won’t be able to change their mind.

Once they’ve made a decision (for the both of you) that decision stands. Even if it’s clearly wrong. Taurus man acts like a toddler that refuses to move.

How Does A Taurus Man Feel After A Breakup?

Once a relationship is over we have no way of knowing how our ex is faring. However, we can look at their star sign to glean some understanding as to how they might cope or feel.

Once Taureans are committed, they are committed for life. They invest everything into their partner. This is serious for them. They have yearned for this security all their life. If they ended it they must have had good reason.

However, if their partner ended it they’ll be feeling quite different in these circumstances.

1. If Taurus man ended it

Even if the Taurus man ended it himself he’ll still feel like he’s lost everything. This is because he has put a lot of time and effort into this relationship.

He has now lost this investment. He has also lost the security and sense of safety the relationship afforded him. He spent a long time looking for you.

Taurus men see their partners as possessions to own. It’s as if they attach material value to them. As such, he’ll want to get back this valuable possession.

If you were the one that ended the relationship it will be extremely hard for Taurus man to accept it. His obstinate nature and stubborn outlook on life mean that he finds it hard to acknowledge other people’s opinions and decisions.

You have to understand that he probably never saw it coming. Moreover, he thought it would last forever. So this is likely to come as an enormous shock to him.

However, if you want to get him back it’s worth considering the no contact rule with a Taurus man. This will clarify whether he misses you or not.

How do Taurus men deal with breakups?

They always regret a breakup, no matter who ended it. This is because they have a pathological need for security. When they find the right one they put all their energy into building a life with that person. Realizing it was all for nothing is a terrible blow.

How does a Taurus man feel after a breakup?

Taurus isn’t a fire sign like Aries, Leo, or Sagittarius. Fire signs have unpredictable tempers and can blow up with rage. This earth sign will go to the ground to nurse any wounds inflicted during the breakup.

How long does it take a Taurus man to get over a breakup?

It can take Taurus man longer than other star signs when it comes to letting go. Only because they invest so much time and energy into their relationships. Once they’ve found the one, all they want to do is settle down and make a life with that person.

Do Taurus go back to their exes?

Will a Taurus man ever come back? Some Taureans never go back to an ex. For them, it’s a matter of pride and self-esteem. On the other hand, remember that Taurus is a possessive sign so it would have been hard for him to let go in the first place.

Do Taurus move on quickly?

It takes Taurus a while to regain his sense of balance and stability after a break-up. He’s feeling like the rug has been pulled from under his feet. There’s no way he’ll move on quickly until his feet are back firmly planted on solid earth.

Taurus men can make loving, committed, and sensitive partners, so long as you learn to deal with their stubborn and possessive nature.