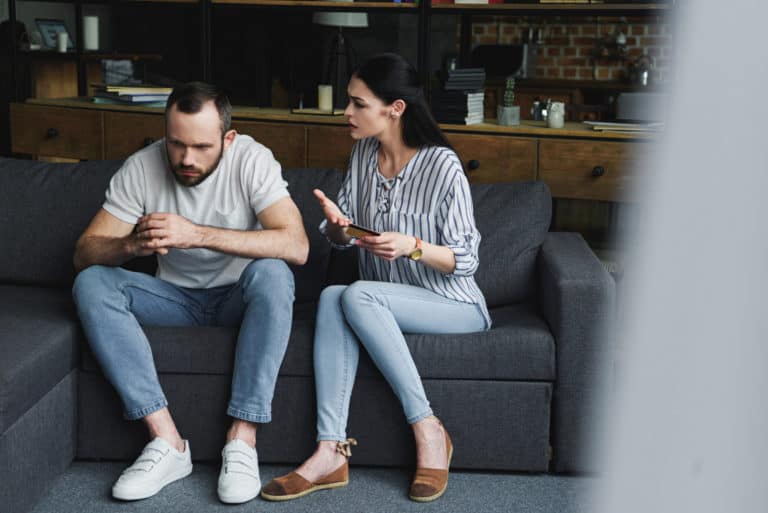 Are you the breadwinner in your relationship but feel like your spouse is taking advantage? Perhaps you feel as if you’re the one doing all the hard work and your husband is just spending your money?

Most of the time, the person that’s using you, in this one case, your husband, will be sneaky and manipulative enough so that you don’t realize that they are using you. A lot of men will also try to control the money of their wife or use a woman financially because they can’t deal with the fact that a woman is more financially stable than they are.

In this article, we’re going to take a look at 13 of the most obvious signs that are common in marriages where a husband financially uses his wife. So, without further adieu, let’s get into it!

13 Signs Your Husband Is Using You Financially

1. He Always Takes More Than He Gives

In most relationships, especially in marriages, both partners give and take when it comes to finances and the financial burden is never put onto one person. For example, it’s quite acceptable for one partner to pay for the bills, but the other pay for everyday expenses for example.

This is a perfect case of giving and take. However, if your man is constantly taking money from you, or he tries to control you and make you pay for everything, there’s a good chance that he’s using you.

2. He’s Always Spending Money On Himself

If your guy is taking your money and spending it on himself, doing things that don’t actually benefit you, for example, buying himself new clothes or going out with his friends, it could be a sign that he’s using you. If your guy wants to spend money on himself, he could be using his own money, not yours - that’s exactly what his individual earnings are for.

3. He’s Reckless With Spending Your Money

If your spouse has no financial independence from you, it could be because he’s going through a tough time and needs financial support.

However, if your spouse is innocently leaning on you financially, they won’t spend your money recklessly. But, if your spouse is trying to take advantage of you for your finances, they will be reckless with your money, spending it on anything and everything they want - this is a huge red flag.

4. He Expects You To Pay For Things

If you find that whenever you go out for dinner or head to the shops you’re always the one paying because your guy never offers, this is a problem.

If your spouse expects you to pay for everything, they will have gotten so used to it that they’re taking advantage of your kind ways by never even offering. They might not even bring their wallet along with them anymore because they expect you to pay for all of their expenses now.

5. He Gets Annoyed When You Spend Money On Yourself

Your spouse should always encourage you to spend some money on yourself and treat yourself, especially if you work hard to earn your money.

In a healthy relationship, your partner should never begrudge you for spending your own money, unless you’re being reckless with it. So, if your partner gets annoyed or makes you feel guilty when you spend money on yourself, it’s really because they wanted to spend that money and enjoy it themselves.

Although not everyone in debt is irresponsible and should be blanketed as ‘users’, if your partner has financial problems and he’s using your money to survive, it’s not good news!

Whether you’ve found out that your partner has a credit card, multiple credit cards or he’s deep into his overdraft in his checking account and suffering from a multitude of money problems caused by lack of self-control, and if he’s showing other signs mentioned in this article, he could be using you for financial stability.

7. He Never Wants To Talk About Finances

Most couples talk about money, and it’s natural to want to talk to your spouse about income and outgoings. However, if your spouse is using you, they will always find a way to change the subject when you bring up finances, or they might even get angry and cause conflict when you try to talk to them about it.

If a grown adult can’t live life on a budget and doesn’t understand personal finance or expenses, no matter how many times you’ve explained it and given financial advice, there’s something wrong!

If your man can’t live on a budget, and it’s your money that he’s going over budget with, - he’s not keeping to a budget because he doesn’t care about spending your money, it’s not his after all.

9. He Doesn’t Have Savings

Most men and women have savings accounts, simply because it’s always useful to have a pot of money set aside in case financial issues occur or there’s an emergency at some point in life.

If you know that your spouse doesn't have a savings account, it’s a sign that he’s financially irresponsible or has experienced long-term money issues, both of which are just going to add to your reasons that he’s using you.

If your man is always pushing you to work, whether it be that he’s encouraging you to take on extra hours at the office or get more clients, whilst he does nothing to contribute to your life together, it’s because he wants your income to increase so he can have access to more money. This is a type of financial control, and it’s definitely a problem.

11. He Makes You Responsible For All The Household Bills

If your spouse is using you for your finances, he will ensure that all of the household finances fall back on you. This might mean that he always makes sure that his name isn’t on the bill, or he accesses your account to pay the bills.

It doesn’t really matter what the ins and outs are - a guy that’s not sharing the bills for the home you both live in isn’t someone that you want to be in a marriage with.

12. He Doesn’t Add To Joint Bank Accounts, Only Takes From Them

When you’re getting married, you will most likely commit to being financially tied, meaning you will probably have a joint bank account. Of course, most couples choose to still keep personal accounts, but they will have a joint account to save money for bills every month.

If you notice that your spouse is always taking from your joint account, to fulfill their spending habits, and they’re never adding any money, they could be using you and draining the account.

13. He Only Shows You Affection When You Pay For Things

Of course, your man might just be really bad with finances and not know the right way to manage money. However, the most obvious sign of financial abuse is if he only shows affection for you and feels attraction for you when you’re paying for things, or stays in a marriage with you even though there’s nothing left to stay for.

How can you tell if your husband is using you?

You will be able to tell if your husband is using you financially if you notice any of the signs that are listed above. Now that you know the signs of financial abuse to look out for, you should be able to spot them easily, even within one day!

Does my husband have to give me money?

What do you do when your husband is financially irresponsible?

Protect yourself so that his financial instability doesn’t affect you or harm you in any way, communicate openly with your significant other and tell him your worries, help him come to his senses, and force him to understand that he has to be more responsible with his money.

What are the signs of an unhappy marriage?

If you feel alone, consistently on edge, used, abused, or unappreciated in your marriage, you are in an unhappy marriage and should either figure out the problems or go your separate ways. If you and your spouse don’t get along, don’t seem to care for each other anymore, and don’t share intimacy with one another, not even a bit, it’s not a good sign.

When to call it quits in a marriage?

If you are unhappy in your marriage and you feel alone, used, unappreciated, or unloved, as mentioned above, it’s either time to sort the situation out with your partner and get back on track with your marriage, or it’s time to decide to call it quits and say go one way whilst your partner goes the other.

You shouldn’t ever stay in a marriage that doesn’t make you feel appreciated, loved, and happy.

After reading this article you will now be aware of the signs to look out for if your husband is using you financially. Although it might be difficult to come to terms with the fact that your husband could be financially abusing you, it’s important that you deal with it straight away, as soon as you confirm that’s what he’s doing.

You’re not alone, a lot of people are in the same situation as you, so don’t suffer alone. All people deserve to feel appreciated and cared for, especially within their marriage, so make sure you do. Did you like this article and find it useful? Let us know in the comments and feel free to share with any women you think need to read it!

You May Also Like
Breastfeeding Your Breastmilk To Your Husband: Is It Normal?
No Comments
How to Deal with Signs that Your Husband Hurts Your Feelings and Doesn't Care
30 Comments
Husband Tells His Mother Everything: What Should I Do?
No Comments