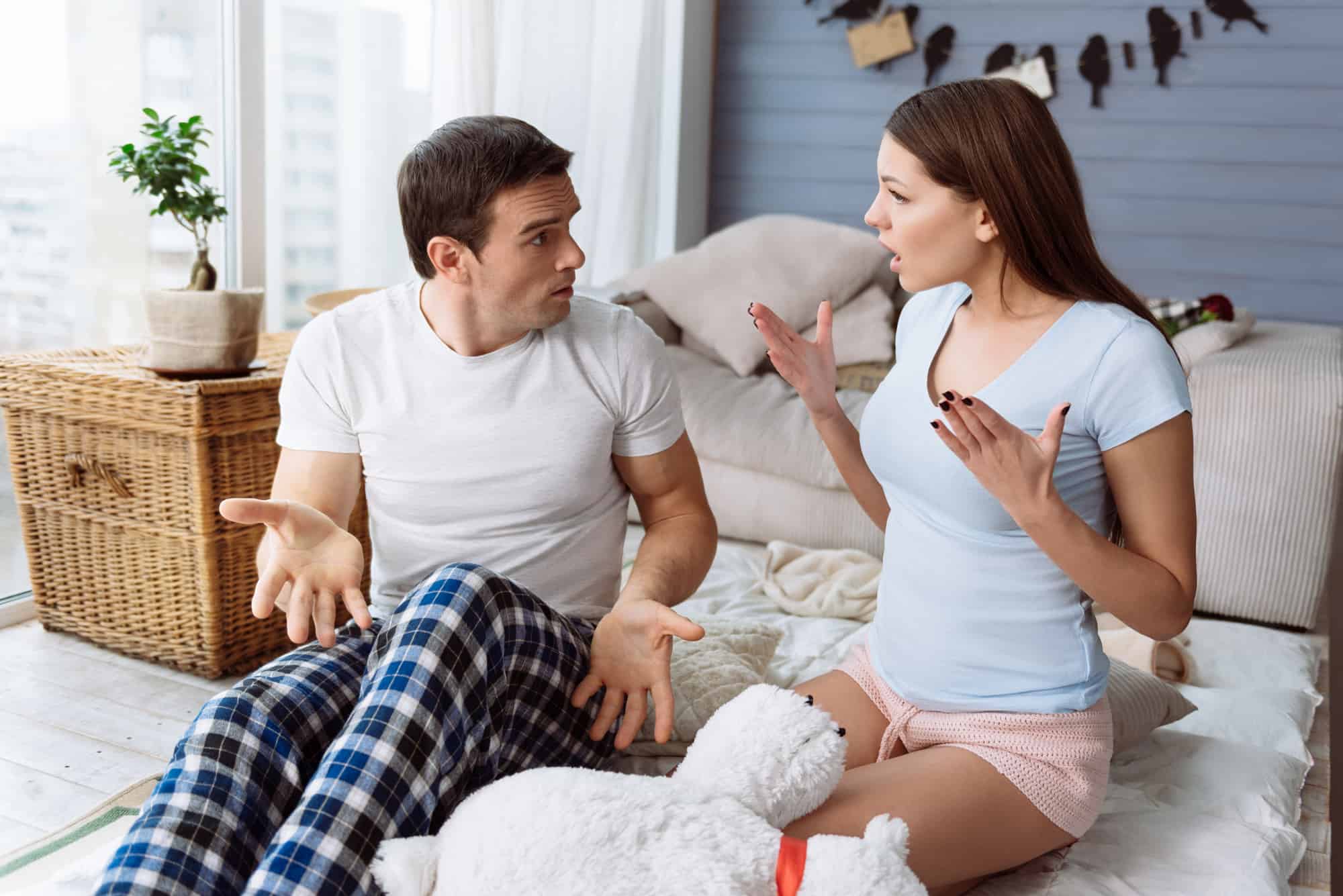 Anyone that has been in a relationship will have been part of an argument. It is likely that at some point that one of those arguments meant that a person went to bed angry, if not both people. Here, we look at ways that going to bed angry can sometimes be a good thing, or how you can use it to your advantage to ensure that your relationship survives.

Why Going To Bed Angry Can Be Okay

Here are some ways to ensure that your relationship can cope with times that one or both of you go to bed angry. You may not want to implement all of these strategies at once, but it can be a good idea to be aware of them if you are part of one of those couples who are prone to going to bed mad at one another.

1. Resolve It In The Morning

Taking some time to get some rest is actually a huge benefit to going to bed angry. Just because you are sleeping on it and have not resolved the issue at hand, doesn’t mean that your relationship will end. However, if you do find yourself going to bed angry, it is important that you do both resolve the issue in the morning. Don’t let it drag on.

2. Take The Time Out To Realize What You Want

It’s important to use the time apart to realize what you want from the relationship as well as get some rest. The best thing to do is to calm down and then try to go over what has been said during the conflict on your own. Ensure that you don’t fester on things to make yourself even angrier, but do take the time to figure out what you want from the situation.

Calming down after an argument that is yet to be resolved is difficult. However, if you are both getting too tired for a resolution to transpire, it can be a good idea to go to bed angry and use the time to meditate. Meditation can be a great way to relax, especially at night. Mediation can also give your brain space to breathe so in the light of day you help resolve the issue between you much better.

When you do wake up the next day, it’s best to try to take the most constructive approach to what has caused such a big issue between you and your partner. All couples go through tough times so it can be good to realize that each issue does need to be dealt with for the relationship to survive. Being as constructive as possible is arming yourself with the best chances of working through conflict.

When going to bed angry, it’s a good opportunity to look back at both the argument itself but also how you acted within it. Often, when going to bed angry, we tend to ruminate on the things that have hurt us, and the upset our partner has caused our feelings. However, look at your actions and what your trigger points were. In doing so, it can make working through conflict much calmer.

6. Be Happy To Walk To Your Corners

So often we hear ‘don't go to bed angry’, but actually this dismisses the positives of what going to bed can really achieve. Realize that if you do go to bed without resolving the issue, that you both know that you will do in the morning. And that by going to bed angry, you are simply getting some much-needed rest so that your reactions are not fuelled by tiredness which can exacerbate situations.

7. Remember You Are Not Perfect

Never go to bed angry and never think that you were a saint in the situation. Even the best couples have faults and every partner has to take ownership of their part in an argument. There will undoubtedly be things you could have done better during the conflict - realize what they were and work on them during the day.

9. Work On The Issue In Future

While resolving issues that cause conflict in a relationship is key, it is also important to realize that you may need to work on the issue in the future. If it takes you going to bed angry at night to come to that conclusion then that is a good thing. A time out will often give you much-needed perspective on a way forward for you both.

Don’t use the time at night, when you are angry, to bring up past issues that had previously been resolved. It’s not fair on your partner and it will only prolong the agony for you both. Instead, stay in the moment to work towards a resolution for the current situation. If you need to go to sleep angry to resolve it in the cold light of day, then so be it.

It’s important not to use going up to bed angry as a weapon. Don’t become a martyr and expect your partner to be all-forgiving the next day. It can make the situation worse and also does not help create a healthy balance in your relationship if you are consistently acting like the one who is always ending up hurt.

12. Focus On Why You Love Each Other

If you have gone to your bed angry, it can be so hard not to focus on the problem at hand. However, shifting your perspective can give couples the opportunity to use the time out in a beneficial way. Concentrate on why you love your partner. It’s a healthy mindset to get into and will give you encouragement to work through the issue constructively the next day.

It’s important not to have said things that you regret and then go up to bed. If you are aware of anything you have said that could have been out of line, it is a good idea to address those issues before going to sleep. Your partner will be grateful which sets a good tone for resolving issues at a later time.

14. Have Advice From A Therapist

If you are finding it more and more common that you both need a night apart after an argument, you may want to consider talking to a therapist together. Therapists won’t act as a referee for an argument, but will instead give you helpful pointers as to how to argue in a more constructive manner so going up to bed angry doesn’t have to be resorted to.

15. Look At Where You Can Strengthen Your Bond

If you are finding that you are having to have time out to help resolve issues too much, you could both work on where you can strengthen your bond to save arguments from getting out of hand in the future. Getting closer means that your arguments can diffuse that little bit more easily.

Remember that if you have gone to bed angry, that you do need to sleep. It is the sleep that will help you make more constructive ways forward the next day. If you wake up tired because you have been tossing and turning all night with anger or anxiety, it will only make matters worse.

One of the ways that you can help yourself sleep after an argument that hasn’t been resolved, is not to overthink it. Don’t go over it and over it in your head. By all means, analyze it for ways you could both do better in the future, but after that, remember to sleep and rest.

Is it bad to go to bed angry?

For some couples, it can be a bad thing to go to bed angry. It can make coming to a resolution the next day much more difficult. However, for some, the space that sleeping on argument can give can sometimes be helpful.

What does the Bible say about going to bed angry?

The Bible tells us that we shouldn’t let the sun go down on anger or on an argument. The emphasis is on the element of forgiveness that surrounds anger, which is why the Bible suggests that people should do everything in the power not to go to bed angry.

What does never go to bed angry mean?

People try not to go to sleep angry to resolve an issue as it can mean that they don’t have any more time to fester over an argument that has made them both so upset. However, in practice, it means that you can both be too tired to come to any sensible solution to the fight.

Is it OK to sleep on the couch after a fight?

Is it OK to sleep in separate rooms when angry?

If sleeping in separate rooms gives you both the space you need to make peace with whatever has made you angry. While it is always good to try to resolve things before you sleep, sometimes if you are too tired to make any constructive resolution, you may need to sleep separately.

Arguments or issues that are not resolved before bedtime can mean that sometimes we all end up having to sleep on our anger. However, while this is sometimes seen as a negative thing, it can also be necessary.

Arguing when you are both exhausted is also not a constructive way to come to a resolution. Instead, make the most of your time apart to ensure that you both can move on from the issue as quickly as possible the next day.

You May Also Like
How To Deal With A Nagging Husband (9 Best Ways)
No Comments
Why Are Men So Mean? (5+ Surprising Reasons)
No Comments
What To Do If Your Boyfriend Won’t Talk Or Is Mad At You
3 Comments