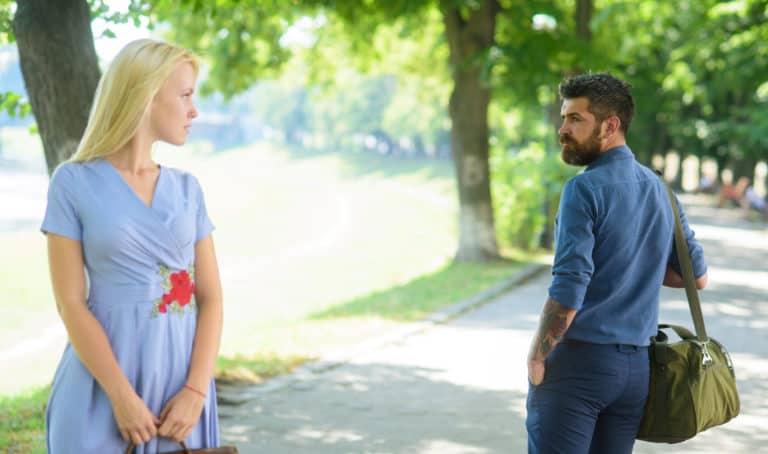 Breaking up really is hard to do. In the day and age of social media, it is even more difficult as you often will know what your ex is up to even without being in contact with them. Or, with smartphones and email, it can be so easy to contact them which makes it harder to get over them in the first place.

That being said, running into an ex can be tough even if you have cut all contact with them and unfollowed them on every social media platform. However, if it happens, what do you do? Plus seeing an ex after many years of seeing an ex after a long time since you broke up can be just as tough sometimes as seeing an ex-boyfriend or girlfriend that you recently parted ways with.

Here, we suggest 13 things you can do to help handle a situation where you see an ex by chance. Reading this can help you walk away from the situation feeling good about yourself and not regretting anything you said.

What To Do If You Run Into An Ex Who Dumped You?

Perhaps one of the best things to remember if you have run into an ex is to smile. Even if things did not finish well with you both and you haven’t managed to remain friends, smiling will be something that helps the situation enormously. It will relax both you and them and sets the tone for the conversation.

It can be difficult to know what to say when running into an ex you haven’t expected to see. Even if you finished in the best way possible, it can be hard to think of something to say to a person who has been a big part of your life, that you don’t keep up with anymore. If in doubt, during your run in, simply ask how they are. And don’t say it as lip service either. Really mean what you say and listen to their response.

3. Say as little as possible

Running into an ex can make any person very nervous. Often, when people feel like they are out of control of a situation due to nerves, they overcompensate by talking a lot and almost gabbling away. If this is something that you would do, try to say as little as possible. Ask them how they are and let them do the talking. The less you say, the less you have to say something that you regret too.

Along with saying as little as possible, another way to keep yourself from doing anything you regret during run-ins with an ex is to keep the whole thing short. Obviously, be polite and don’t be rude, but try to extract yourself from the situation as quickly as possible. This not only stops you making any slip-ups, but it also gives you less opportunity to start thinking about your relationship again and whether you should try again.

Perhaps the one thing that we all should aim for when we run into an ex is to be as dignified as possible. In doing so, you really will protect yourself from making any mistakes that cause you a reason to cringe afterwards. Also, if you are dignified, you give your ex less reason to feel relieved if they broke up with you or, they will appreciate that you are respectful of them if you broke up with them.

If you run-in to an ex when you are out at a bar or social event that you can’t leave, it can be a good idea to call friends to ask for back up. In doing so, you will have a lot more confidence that way, which again stops you from doing anything that you regret. If you are confident, you are much less likely to say something to your ex that you wish you hadn’t or act in a way that makes you feel silly afterwards.

It can be an easy thing to do, to try to make the situation as easy as possible for your ex. While you absolutely should be dignified in your approach to them, it is by no means up to you to make the situation easy for them, but hard for you. Don’t defer to their every wants or need. Ensure you do what you need to do to make yourself feel comfortable and no more.

8. Don’t read too much into it

Reading too much into situations is one way that you can make your head spin. It also makes running into an ex far more nerve-wracking than it needs to be. Remember that they are probably as nervous as you are and as a result, it can be a difficult situation for you both - regardless of who broke up with who and how things ended between you.

If you panic when you see an ex you will not give yourself the opportunity to act in a clear and cool, levelheaded way. Again, remember that they too will probably be nervous and will find seeing an ex just as difficult a thing to do in their life as you do in yours. Remember, too, that they are just a person and that they have their own stuff going on in their head that will make seeing you just as tough as you find seeing them.

To stop yourself from panicking and acting out in odd ways, the one thing you can do at the moment you run into your ex is not to analyze the situation there and then. And certainly don’t do it by asking them their opinion. Instead, try to break down the situation once you have walked away from each other. But try to keep even that analysis short and sweet. Do it too much and you’ll end up making the situation seem bigger and worse than it was.

A good thing to do when you run into an ex to ensure that you walk away from the situation with your head held high is to be yourself. If you try to act like another person or take on a persona that isn’t true to you, you will most likely make the situation worse than it needs to be. Have confidence in who you are and what you have done with your life since you saw them last. That confidence will make the run in so much easier.

One thing that can make the whole scenario much worse than it needs to be is if you try to go for a hug or a kiss hello that ends up in you both going for the wrong side or not mirroring what the other person is doing. To avoid this, remember not to try to make any physical contact at all. Wave and smile at most.

Having a plan about what you are going to do if you run into an ex is probably the best idea for you to keep in mind. Try to take on board all of the above suggestions as well as thinking about a good way to extract yourself from the scenario as graciously as possible.

Should you reach out to an ex who dumped you?

It really depends on the situation and what happened between you and your ex if you should reach out to them. If you really feel like you are not properly finished and you have some unfinished business to delve into, it can be worthwhile. However, if they’re not interested you could end up getting hurt again.

What to do if you run into your ex during no contact?

If you run into your ex during a time when you are not meant to be in contact with them, it can be a good idea simply to keep the contact you do have with them as short as possible. Be polite, acknowledge that you’ve seen each other and move on. It can save you hurt in the long term.

What if I run into my ex?

When you see your ex, how you react will depend on how things finished between you. Some people will be able to have a civil conversation, whereas others will find face-to-face contact turns into an argument. Try to keep the peace if you can and keep things as brief as possible.

How do you act around an ex who dumped you?

If you got dumped by someone you were still really into, it can be hard to know how to act around them. Bearing that in mind, try to say or do as a little as possible.

Why you shouldn't reach out to your ex?

Reaching out to your ex is often not what it cracked up to be. If you ended badly, you may just have to come to terms with the fact that you won’t get the resolution that you need. Arguments and more hurt are likely to ensue. Remember that you ended things for a reason and have confidence in that.

Running Into Your Ex - Key Takeaways

Running into an ex is sadly invariably awkward. Feelings of love and resentment are all tied up with each other making it difficult to act normally and be ourselves.

However, regardless of who broke up with who and how your relationship ended, remember to have confidence in yourself. In doing so, you will be much more relaxed during the run-in and therefore much more likely to walk away with no regrets.

You May Also Like
My Ex Texted Me Then Ignores Me (11 Possible Reasons)
No Comments
If Your Ex Wants To Be Friends What Does It Mean (11 Reasons)?
No Comments
Is My Ex Trying To Make Me Jealous? (13 Ways to Tell)
No Comments