Home / The United States of Breakups: When Are You Most Likely To Be Dumped In Your State? 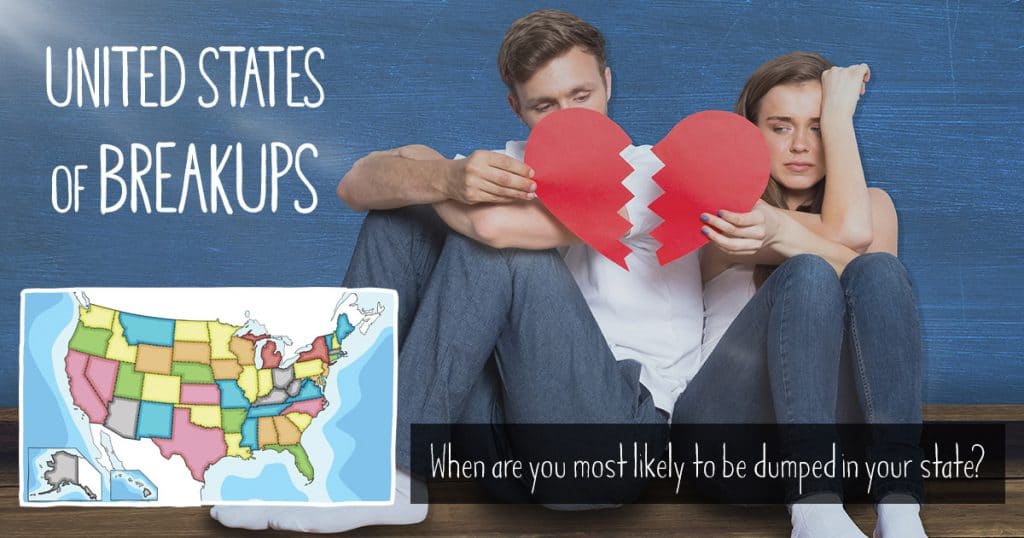 The United States of Breakups: When Are You Most Likely To Be Dumped In Your State?

Let’s face it. Whether they happen in January or June… breakups SUCK.

But… it’s safe to say that there are times of the year when an unexpected ditching can sting just that little bit harder.

Dumped on February 13th? It’s ice cream and Adele on repeat until July!

Back in 2014, a study of Facebook status updates found that March and December were the most common months for relationships to end.

But here at Her Norm, we wanted to find out if that varied across the USA.

Were New Yorkers more likely to be scroogers—who break up just in time to save money on Christmas presents⁠—than Californians?

Were Texans inclined to dump their partner in the run up to Valentine’s day?

We analysed data from Google to find out...

How We Figured This Out…

Like we do for most things in our lives these days… we used Google. Well, a specific tool that they provide to be exact.

Google Trends shows the relative popularity of a search term over time (on a scale of 1-100). So we simply looked at when searches for “how to break up” (which gets THOUSANDS of searches each month) peaked in each state.

In the example below (New York), searches peaked between the 10th and 16th of February…

Once we had the statistics, we split the states into 7 groups…

New Year is a time for fresh starts. And it seems this applies to relationships too. January was a popular month for breakups, with searches peaking in 7 states.

Surely no-one would be cruel enough to break up with their guy or gal just before Valentine’s day? Well, as we already mentioned, it seems like plenty of New Yorkers did just that! And they weren’t alone. Searches also peaked in Michigan just before the most romantic day of the year.

We call this group the string alongers. They didn’t have the bottle to break up before Valentine’s day—instead, they strung their partner along, waiting for the last 2 weeks in February to give them the chop. Is this better or worse? We can’t decide!

The ‘Spring Cleaners’ (March, April, May)

The spring cleaners like to take a broom to their relationship in time for the Summer. There were 12 states that prefer to do their breaking up in the Spring.

We did think about calling this group the ‘Strategic Scrooges’. They know Christmas is just around the corner, and want to get their dumping in early. But we thought we’d give them the benefit of the doubt…

Maybe they had just fallen for another (get it?).

And finally… we’ve got the scroogers. These 6 states preferred to do their ditching just before Christmas. We hope Santa put them straight on the naughty list and rewarded them with a lump of coal!

Here's a full rundown of all the states in alphabetical order.

Which group did your state belong to? Drop a comment below and let us know!