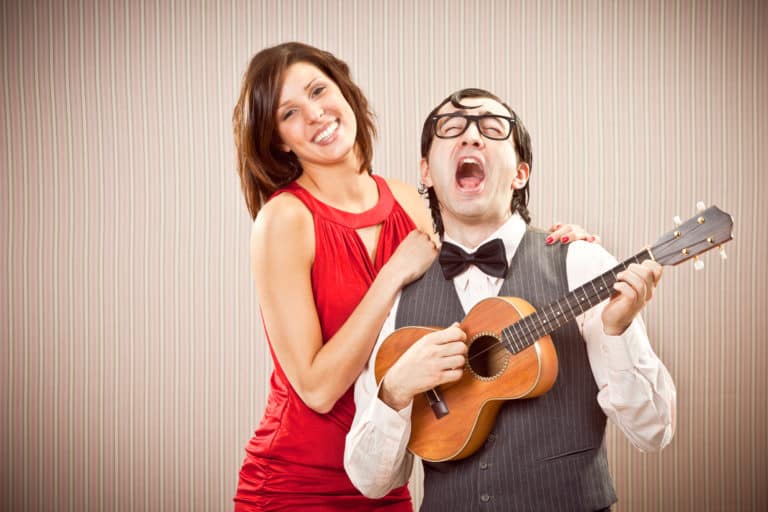 Usually, women’s biological and social conditioning on voice preferences favors men who sound more masculine, relative to those with more treble. For this reason, I imagine guys with high-pitched voices won’t always have it easy in the dating scene, but it doesn’t mean they have no prospects at all. In fact, the reverse might be the case.

Though things seem to have been a bit more black-and-white in earlier times when decisions were made based on survival potential, the concept of attraction has evolved since then. While many of us still revert to ancient ideals, often subconsciously, a lot more people are going against what is considered the norm for what they actually prefer.

If you are wondering why a woman would choose a man with a baby voice over one so macho the sound makes her quiver, here are some:

1. Men with high voice pitches are not as common

Everywhere you turn, you are likely to find your run-of-the-mill deep-voiced guy, but how often do you meet their higher-pitched counterpart? Despite the mainstream concept of what makes a guy’s voice sexy, uniqueness also plays a role in attractiveness too significant to ignore.

Granted, many people tend to run with the universal idea of what is considered attractive. Still, those dating for relationship purposes may find distinct traits more desirable. The idea of being with someone who is not like everyone else is good enough for some women, irrespective of his voice pitch.

2. They see themselves in such men

Another reason a woman might find a man with a treble voice appealing is if she identifies with him. As they say, it takes one to know one. It could be from sympathizing with the marginalization these men go through in the dating scene for no reason other than the depth of their voice.

Or that they have a unique trait themselves that makes them understand and appreciate others who do too, even if it’s not exactly the same. In addition to voice and being different, research also shows that being similar to someone not only makes them more attractive, but it also makes us trust them more.

Some women are drawn to “feminine” traits in a man. It’s called gynosexuality, a term used to describe those attracted to femininity or female characteristics in anyone. Now the reasons for these differ too, one of them being self-preservation. The hormone responsible for lowering voice pitch in men also predicts untrustworthy behavior and makes them more likely to cheat.

Perhaps women find those who seem to have lower amounts of T attractive because they subconsciously want a mate who is likely to hang around. More research also links this same hormone with domestic violence, which takes the point further from just protecting our interests to potentially our lives.

4. They are somewhat attracted to women

The intrinsic urge to protect themselves aside, a 2017 internet study hints at the possibility of sexually fluid women being more attracted to perceptible women-like features in a man.

In an experiment about the appeal of male faces with varying degrees of masculinity, exclusively hetero women favored masculine looks while those who also liked girls rated feminine ones higher.

In other words, if you are bi, pan, or gynosexual or mostly straight but get the occasional crush on fellow women, you’ll likely find a guy with a high-pitched voice attractive.

5. They have deep voices themselves

The science behind attraction is complicated, to say the least. While factors like biology, proximity, voice, looks, past experiences, and similarities all play a part, it’s also no secret that opposites attract. We may find people with features we do not possess attractive in hopes that they complement us – the yin and yang of it all.

There’s also the fact that men are typically drawn to women with higher voice pitches, which can make those who don’t make the cut feel unattractive. In keeping with the study above, experts say a woman who perceives herself as unattractive might be more attracted to the less in-demand men basically to protect herself from rejection.

Notwithstanding, some people live to give rigid gender norms the finger. For women whose jam is defying oppressive stereotypes, being attracted to what a gender-conforming person might find unmanly is not uncommon.

In this case, it goes beyond just physical characteristics like looks and voice. It’s also sensitivity, kindness, warmth, empathy, and other personality traits typically associated with the feminine. This rebellious disposition isn’t only seen in loud social activists either. On some level, we all yearn for the freedom of such ambiguity.

Like the other parts of our body, it turns out vocal cords wear with age too. Apparently, changes in the muscles of the voice box become more obvious as you get older. The cords get thinner, the larynx becomes more rigid, and as a result, your voice may become raspier and lose tone.

According to the British Voice Association, a man’s vocal pitch is likely to rise after middle age while women may notice a drop in theirs. Smoking, alcohol, drugs, allergies, overexertion, and even emotional stress can also fast-track the vocal cords’ natural aging process.

The point is, a potential mate’s vocal range is not as likely to be a dating deal-breaker at a certain age as it is for the younger folks. You’re either seeing changes in your own voice by then or have seen enough of it in your peers for it not to throw you anymore.

What does it mean when a guy has a high-pitched voice?

It means his voice box didn’t develop quite like his lower-pitched counterparts, causing the sound that comes out of his mouth to be higher than others. Even though this might not take away from the said guy’s manliness, his voice may not project as much confidence as you might expect of an average man.

Generally, women with high vocal pitches are considered more attractive than their male counterparts, but to each his own, it largely depends on who you ask. Though some women consider a high-pitched voice in a man a deal-breaker, several others genuinely find it attractive.

What type of voice are guys attracted to?

Just as biology predisposes us to be partial to men with deep voices, guys are naturally attracted to women with high vocal ranges. Notwithstanding, the same guys also tend to prefer the raspier, lower-tones voice in women when considered in a sexual context.

Do guys’ voices get higher when they like someone?

A guy’s voice might sound slightly higher than usual if he finds you attractive, though it can also drop a pitch and become deeper when sexually aroused or trying to seduce. Typically, the vocal range varies based on their emotions, and they sometimes modulate it to project confidence.

Do guys get turned on by your voice?

Yes, your voice can potentially get a guy going sexually or turn him off completely. While some guys’ voice preferences are quite the spectrum, some are only attuned to what is culturally considered attractive, e.g., soft-sounding women.

Biologically, they are drawn to females who sound fertile, i.e., those with estrogen-rich, high-pitched vocals. There are also those with auralism, a legit sexual fetish where they get aroused by sounds.

Granted, not every man can pull off the calm, macho energy that deep-voiced men can, but those who are attracted to them nonetheless prove there are different definitions of sexy. An average guy with a high-pitched voice may have to search a little longer than his more “masculine” counterpart, but it's definitely women out there who prefer him for that exact reason.

As per usual, kindly leave your thoughts on the list in the comments and share the article if you liked it.