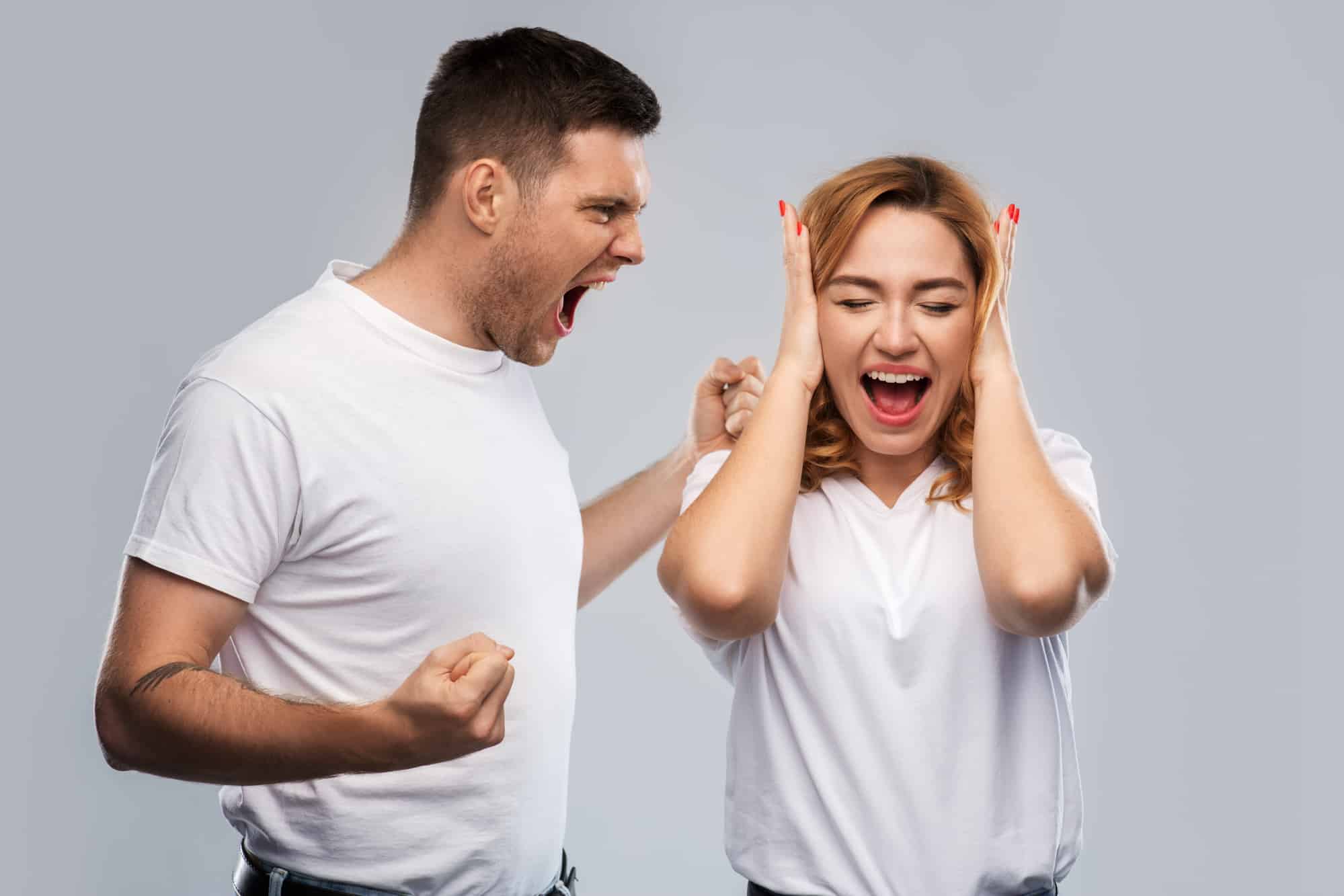 Why Are Men So Mean? (5+ Surprising Reasons)

Mean men are everywhere and inhabit all walks of life. Some use their mean behavior in relationships. Here they’ll intimidate or abuse their partners. Others are highly successful individuals in positions of power. But what makes a man mean in the first place?

Of course, it’s important to say that not all men are mean. However, it is interesting to explore the possible reasons why men can often act mean.

Decades ago the roles of people were clearly defined. Men went out to work, they were the breadwinners and females stayed at home. Women did the housework and looked after the children and the home.

Good men were strong and protective. Men did not cry in public (or in private for that matter). Men didn’t get involved in messy things like childbirth. Females were the sensitive ones, the delicate souls that bowed under their man’s rules.

Men held all the positions of power. In the workplace, in government, and at home. Men made the laws for all people, in fact, women couldn’t even vote until the early 20-century.

Fast forward to the 21-century and it’s a completely different story. Now many men are expected to be at their child’s birth. Both genders work the same hours. So, when all is said and done, men need to do their share of housework.

Men are encouraged to open up about their feelings, however, we still expect them to be a strong and supportive partner.

But it’s not just about men. Many women’s roles have also changed.

Females now earn more than their male counterparts. And they’re standing up for their rights. They are not taking the so-called men’s rules for granted anymore. They’re making their own rules. So how is this shifting landscape affecting men?

Namely that characteristics such as beauty, honesty, kindness and compassion are female values. On the other hand, values such as strong, provider and powerful were attributed to men.

That said, we may be living in an age where people need gender equality, inside we’re fighting decades, if not centuries of programming.

So, there are many general reasons why men can be so mean. But I want to look at more specific ones. This is because there are certain types of mean men.

Reasons Why Men Can Be Mean

I remember watching the film Anchorman: The Legend of Ron Burgundy. Will Ferrell plays Ron and the gorgeous Eva Mendes plays his wife. In the film Ron is always putting his wife down, telling her how plain and dowdy she is.

Eva is always beautifully dressed and looks sexy and stunning in the film. It’s only about two-thirds into the film Ron tells her that he does it because he’s so insecure. He knows just how exceptionally gorgeous she is but he’s afraid she’ll leave him.

Some men are mean because they have deep-seated insecurities which they don’t talk about. Their meanness can take the form of excessive control or jealousy.

It helps to understand why men can be so mean if you look at how many communicate. For example, a friend of mine is seeing a married bloke. He texts and sees her when he can but obviously it’s difficult, what with him being married and everything.

He texted her last week and told her he was taking his wife on holiday for a fortnight so he wouldn’t be calling or texting her. She immediately called me to ask me what I thought the text meant.

I said that I thought it was pretty clear what it meant; he was letting her know he wouldn’t be in touch for a couple of weeks. But my friend had to analyse every word of the text.

My point is that a woman will need to analyse words in texts, calls or face-to-face meetings. Men don’t tend to do the same.

Women also put more importance on what’s said. So, what you men said as acceptable might not be to females.

Let’s go back to men’s traditional roles of the strong, protector bringing home food for the family. Cavemen would be expected to fight or die. Even to this day, men are supposed to be strong and powerful.

However, nowadays there are no sabretooth tigers to fight off. Moreover, they don’t have any weapons at their disposal, but they must still appear to be strong. So they use their words to attack and maim instead.

3. His father was mean

We learn a lot about our behavior from our parents. Therefore, if a boy grows up watching his father constantly demean his mother he’ll think that this is the right behaviour.

But don’t think this is necessarily about abuse or guys putting their hands on a woman. It could be how he speaks to her. Or even how he expects things to be done for him from her.

He might need her as his own personal servant. He may not show her any respect by coming home drunk and late. He may spend the household budget on himself and not allow her any money.

He may control her financially or emotionally. He could put restrictions on her time and not allow her to partake in any leisure activities. Men who use women may have had a controlling father.

4. He doesn’t love you anymore

Many people act like this because the relationship is over and they can’t face telling you. So they believe that if they treat you badly you’ll end it. This saves them the bother and mess of having to break up with you. You’ve done it for them.

This is a coward’s way of ending a relationship. Men don’t like drama or conflict. Acting mean towards you is a way for them to evade the responsibility of being a mature adult.

It’s also one way to end a relationship without feeling guilty. Perhaps he’s seeing someone else and he feels bad about that. So the last thing he wants is a double dose of blame.

That said, he might have so little feelings or love for you that he really doesn’t care how he treats you anymore.

5. He was spoiled as a child

Then there’s the spoiled child who turns into a narcissist. If a child is given no boundaries when he’s young he will think everything is on offer. If you don’t dish out consequences for bad behaviour he will never learn that his actions have meaning.

More to the point, a spoiled child grows up into an adult that thinks he’s entitled and special. These types of men don’t understand that they need to put in the work to be successful. They’ll squander every opportunity afforded to them then blame others when things don’t go right.

They never take responsibility for their actions. They go through life expecting everything to be delivered to them on a plate. If and when they don’t get it they can turn mean and aggressive.

When girls have problems they turn to their girlfriends for guidance and support. When guys have a problem they feel as if they have to solve it themselves. Men have a fight or flight response built into them that perhaps females don’t feel as much.

What this suggests is that when a problem occurs men will try and find solutions. Girls don’t do this. They like to chew the fat. They’ll talk about the problem and in talking they feel calmer. A problem shared is a problem halved and all that.

But guys are creatures of action, not talk. So if they come up against something that cannot be easily solved it will cause them no end of stress and anxiety. But the thing is that men have been taught from an early age not to show emotions.

However, you cannot repress nerves and worry indefinitely. Inevitably it will rise to the surface. If your partner is irritable or snappy with you he could be struggling to cope with stress.

What love means to a man?

Love means different things to different men. For some guys, love represents making a commitment for life. For others, love means actions and not words. Men find it easier to do things for their partners rather than express their emotions.

What is mean man?

Mean men don’t care about their partner’s feelings. They tend to put themselves first and damn the consequences. They are selfish and will either end up on their own or with submissive people.

When a man teases you what does it mean?

When a man teases you it can mean that he fancies you but is playing safe. Guys often tease girls because it’s a form of fun flirting. In fact, even girls tease guys sometimes. It is a good sign so long as the teasing is not malicious.

How can I get a man?

Work on being the best version of yourself and men will flock to you. Anyone can get a man, but you want to get a good one that will love and cherish you. The last thing you want is to bag a mean one

What a man wants in a woman?

Men want an easy life with no drama. But they also want to win the prize. Men are competitors after all. They’re looking for someone who exudes natural beauty, is kind and compassionate and will make a good mother to their children.

Did you find the answers you were looking for in my mean guy’s article? Do you have experience with mean men? I’d love to hear your thoughts. And please share this article if you enjoyed it.

You May Also Like
21 Signs He Still Loves His Ex-Wife
No Comments
My Husband is Always Annoyed with Me: What Should I Do?
1 Comment
My Husband Refuses To Change (11 Things You Must Do)
No Comments