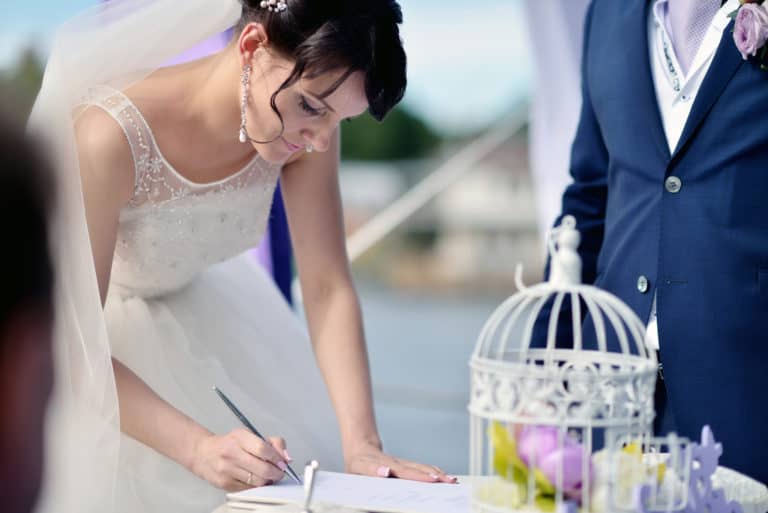 When I was younger I would joke with a friend of mine that if neither of us was married by the age of 60 we would enter into a marriage of convenience with one another. Of course, this was before I met the love of my life, Jason.

At the time I hadn’t really thought about how a marriage of convenience would look like.

So my question to you is ‘would you marry for convenience?’ It is a simple question and I am guessing the majority of you answered no. But I have some interesting facts for the romantics amongst you.

Statistics show that 50% of all marriages end up in divorce. For second marriages the number is even higher. Worryingly still, 60% of marriages end within the first 3-5 years.

Maybe, instead of marrying when we fall in love, perhaps it is time to consider a marriage based on convenience?

So what do I mean when I talk about a marriage of convenience?

What Is A Marriage Of Convenience?

A marriage of convenience describes any marriage between two people for strategic reasons such as financial, practical, or legal. People do not enter marriages of convenience because they love one another.

Historically, a marriage of convenience was used to describe a marriage used to gain an immigration advantage. In other words, the sole aim of the marriage was for one person to gain residency rights.

However, this definition has changed. Immigration courts discovered genuine couples who ordinarily would not have married but had to for one of them to remain in the country.

So the definition of this kind of ‘sole aim’ marriage is now described as a sham marriage, and should not be confused with a marriage of convenience.

Now that I have cleared that up, let me look at the pros and cons of marriages of convenience.

The Pros and Cons When You Don’t Marry For Love

1. You don’t have to worry about being lonely in old age

Loneliness is a killer. Experts believe it is more deadly than smoking 15 cigarettes a day, it is worse than obesity and it can increase your risk of death by 26%.

It is no wonder then that people are seeking companionship as they get older. You may find that certain aspects of a relationship become less important, such as active sex life, whereas others increase. So a marriage of convenience provides a constant companion in old age.

2. Your obligations are clearly set out from the beginning

A marriage of convenience is much like a contract. You set out the rules from the start; each person agrees with their role and contribution and, hopefully, you both live happily ever after.

In a romantic marriage, you are full of love and passion and you wouldn’t dream of setting up rules in a contract. The purpose of your marriage is a loving union between two people.

3. There is no risk that the romance will die

As you are not in love from the beginning, you do not have to worry about falling out of love. So long as both parties are considerate and respect their partner’s boundaries, the marriage of convenience should have every chance of working.

The facts support the marriage of convenience, or at least, arranged marriages. Less than 4% end in divorce. This shows that when your relations or your family choose your partner relationships have a happier ending.

4. You can pool resources and live a better life

5. Plans are made without the emotional baggage

When you enter into a romantic relationship it is easy to bring all your emotional baggage from previous relationships with you. I have done this myself. Even though I am happy with my wonderful boyfriend, I still get triggered by memories from ex-partners.

I have to stop, take a breath, and remember not to drag irrelevant baggage into my present relationship. This rarely happens in a marriage of convenience.

6. A married couple will get better tax breaks

Just as there are financial reasons to pool your resources into a two-person household, so are there tax reasons for marrying that person. You get tax benefits when you are married that the single person is not entitled to.

Here are just a few:

7. To raise your social standing/class/respect

You cannot change where you were born or what class you are. But with a marriage of convenience, you can marry up. In certain countries, the class system is of utmost importance. The UK has a working-class at the bottom and an upper class at the top and the two rarely meet. India has a caste system, which is a strict and fixed social order.

In both of the above examples, it would be rare to marry from the bottom group into the top. However, entering into a marriage of convenience allows you to quickly jump up the social ladder.

8. To hide your sexuality

I have a dear friend who is a lesbian Muslim woman. She entered into a marriage of convenience with her husband 20 years ago. They have four children and she has kept her secret since the day of their wedding.

Neither are happy but he especially does not know why his wife is so depressed. I have asked her why she will not tell him the truth and she says that if she does get a divorce she will be ostracised from her family.

9. To appease your parents

Sometimes arranged marriages are called marriages of convenience. Whilst this is not strictly true in the sense of this article, it can feel like it for the children of the family who have arranged the marriage.

It seems convenient for a family to marry off their children to eligible spouses so that there is a union between the two relations. However, a marriage of convenience is anything but for the two participants.

10. There is an imbalance of power

When we think about a marriage of convenience we often picture an older, wealthier man and a young, beautiful girl. In this marriage, the older man has all the power and control.

A good example of this is the multi-millionaire founder of the Playboy Empire Hugh Hefner. Hefner would have been surrounded by the most expensive lawyers and advisers to protect his wealth. Anyone entering into a relationship with him would be at a massive disadvantage.

Years before I met Jason I dated a wealthy man. He lived in an exclusive, gated neighborhood, drove a range of flashy high-performance cars, and wore classy attire. But he was kind and charming – to begin with.

Although I did not enter a marriage of convenience with him, as soon as I moved into his home he began to change. He wanted to know where I was all the time. He started questioning what I was wearing, he didn’t like the makeup I applied.

So although I lived in a beautiful house on stunning grounds and got to eat in fancy restaurants, none of it mattered. I was being controlled.

I remember the day I left him. I moved into my own small apartment right in the city. I didn’t have much but I was happy.

What does the marriage of convenience mean?

A marriage of convenience is a marriage undertaken for any reason other than love or passion. It is a marriage for practical, legal, or financial reasons. People marry for convenience because they are lonely, they want to pool resources, take advantage of a couple’s tax benefits, and many other reasons.

Is a marriage of convenience legal?

It is legal so long as you are not marrying to gain entry to a country under false pretenses. If you married a person from another country solely to live in that country then historically that was known as a marriage of convenience. Now is commonly known as a sham marriage.

Do marriages of convenience work?

Marriages of convenience can work so long as both parties agree and are aware of the terms of the marriage. If there is an imbalance of power or wealth the marriage may not work. If the reasons for entering a marriage of convenience are deceitful, for example, to hide one’s sexuality from parents, the marriage is likely to fail.

What is a female husband?

A female husband has several definitions. In 19-century America, women would hide their gender and marry to live a better life as a man. In African countries, older, sexually ambiguous women become female husbands and assume male roles within the marriage. Then there are modern marriages between trans-people.

What do you call a fake marriage?

A fake marriage is a sham marriage. People commit marriage fraud for a few reasons, but the main one is to gain immigration rights. The penalties if found out include instant deportation, incarceration, hefty fines, and restrictions on entering that country in the future. A fake marriage is not a marriage of convenience.

You May Also Like
I Want My Husband To Wear A Dress (17 Steps To Getting It Done)
39 Comments
Husband Only Touches Me Sexually (7 Possible Reasons Why He Does It)
No Comments
Is My Marriage Over? (10 Alarming Signs It Might Be)
No Comments