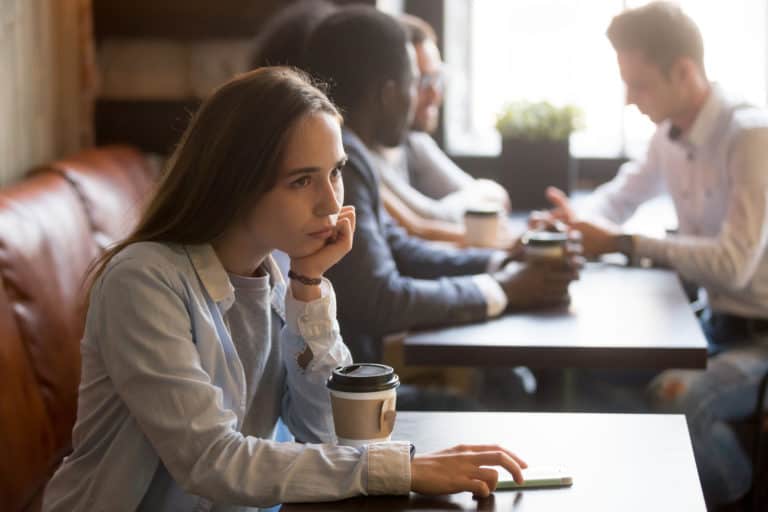 ‘’Why did he ghost me?’’ That’s one common question asked by many women.

Well, if you are active in today’s dating scene, chances are you’ve been ghosted or have ghosted someone. This is funny because a 2019 YouGov survey found that 30% of American adults have been a ghoster, while another one found that a whopping 78% percent of single people had been ghosted. Specifically, millennials.

That’s nearly four out of five of the 800 participants who had an individual they felt a connection with go incommunicado on them. Just disappear without explanation, leaving their ‘partner’ wondering if they were walking and somehow found themselves on a deserted island somewhere far away from civilization with no reception.

Or that maybe they were just fine, and the radio silence was a message in itself, like “have a great life, just not with me.” The numbers may be inconsistent, but I doubt anyone would argue that ghosting is common alright.

You’d think that’d make it easier to accept, though, but it doesn’t, especially with guys. And it’s never the ones you expect, too, sometimes it’s even the ones who come after you. Anyway, if it’s been a while with no word and you can’t seem to place why he would do that, the following are some possible reasons men ghost.

9 Possible Reasons He Ghosted On You

1. He has commitment issues

This may not make you feel any better, but some people actually experience difficulty with commitment. Guys who seem to be feeling you only switch up and start to withdraw when you try to define the relationship.

Though men who fear commitment also tend to have issues with intimacy (like hating cuddling after sex), some of them don’t give it away that easily. These are even better than their hot and cold, mixed-signal-sending counterparts. At least with the former, you know not to get your hopes up.

Yet they all have this little thing in common called unresolved issues, which can be anything from a bad breakup to as far back as a messy childhood. You don’t want someone unpacking any of that on you, trust me. If a commitment-phobe ghosted you, you probably dodged a bullet.

Another possible reason he ghosted is that he has a crippling fear of confrontation and couldn’t bring himself to end it properly. Some men find it hard to look a woman in the eye and hurt her, so the cowards take the easy way out and just bail.

After all, everyone ghosts these days, right? In his head, he might even be thinking he did you a favor by saving you the sting of rejection or a breakup. When in fact, it’s more likely that he couldn’t trust himself to hold his ground if he ended things face-to-face.

Then there are the emotionally weak ones who won’t end things appropriately because they know they might still want you tomorrow. The ones who want to eat their cake and have it. They want the benefits of an established rapport while still getting to enjoy the freedom of an unattached fellow.

He wants a break but doesn’t want to explain himself per se, nor does he want to cut you loose totally, so he keeps you hanging by truncating communication. That way, he can hit you with a “long time” text three months later and attempt to ‘explain’ lol *insert clown emoji*.

Then again, as your resident speaker of the brutal truth, I also have to tell you of the possibility I know has undoubtedly crossed your mind. Maybe he’s just not that into you? No one can really speak to why someone ghosts, except, of course, the ghost himself, but if you’re dating, this is bound to happen to you some time.

No matter how awesome you are, not everyone will feel chemistry with you, which is totally okay. What’s not is for somebody to up and ghost without giving you the chance to talk things out like adults.

5. He’s afraid you’re not into him

On the other hand, a man can ghost you if he feels you are not as interested in him as he is in you. Not very ‘manly,’ I know, but it’s been known to happen. He is afraid of getting his feelings hurt, so he gets in front of it and withdraws first instead.

He may have read the wrong meanings into the vibe you were giving off in the relationship. Perhaps, you were not available enough or didn’t seem to want it on the same level he did, or whatever other reason. But isn’t that what communication is for? Couldn’t he have just asked? Well, maybe he tried (and failed) to, indirectly, you know how men can be.

6. He noticed a dealbreaker

It’s also possible that your partner (now former?) chose to ghost because he saw something he couldn’t get past. Think about it, did something change in your relationship recently?

Perhaps, a heated argument where you both said some things you couldn’t take back, a little issue called cheating, and he found out. Sometimes, it’s nothing you did. This one time, this dude ghosted a friend of mine because his friends didn’t like her.

A man might also ghost when a woman he’s just dating for the fun of it starts acting like his girlfriend. Perhaps things started on that note for both of you, then someone (hint: not him) caught feelings and, worse, showed it.

No matter, the truth is still that a guy who freaks out and runs for the hills at first sight of attachment is immature. No one would crucify him for not being ready for a serious relationship (you really shouldn’t), but how hard is it to, I don’t know, let someone know rather than just flee. Smh.

8. You were a little too much for him

Sometimes, men adopt the act of ghosting, not because they don’t still like you but because keeping you around is taking more out of them than it’s worth. Like, I wouldn’t be surprised if they actually draw up a pro vs. con list then choose ghosting when the latter outweighs the former.

“She’s too emotional, her personality is too different from mine, she’s extremely needy, too clingy, she’s hot, but she is doing the most sometimes,” and similar stories. Their loss, though, there’s someone out there who your personality will be just perfect for, and that’s the one you should focus on finding.

9. He met someone else

Finally, he may have met someone that he likes more. Not every man dating knows how to play the field and those who do can decide to get serious with one woman. It could have also been an old flame situation, especially if things were good between you when the line went dead.

Perhaps the love of his life gave him another chance he couldn’t pass up, and he couldn’t bring himself to tell you it’s over.

What does it mean when a man ghosts you?

When a man you are dating or in a relationship with cuts all forms of contact with you without prior notice or an explanation, it’s called ghosting.

What do you do when a guy ghost you?

Once you find out you’ve been indeed ghosted, your next line of action depends entirely on you. You may choose to call the guy out on his BS or skip right to cut communication with him too. Do what you need to do to get over/heal from what he did, then pick yourself up and move on with your life.

How do you respond to a guy who ghosted you?

If a guy who ghosted you tries to get back together, I advise you to take your time to think deeply about how his disappearance made you feel. Ensure he acknowledges what he did and consider whether his explanation is convincing enough to be worth the risk of getting hurt like that again. Just in case he ghosts again.

Do guys ever regret ghosting?

Most guys resort to ghosting out of fear of one thing or the other, so there’s always a chance that they might regret that when that fear is no longer a factor. They may also regret their action later if they don’t find another woman like you or out of sheer maturity.

Is he ghosting me or just needs space?

Men communicate when they want to. If he ever leaves you wondering whether he needs space or is just ghosting, believe the latter. If he has found a way to convey what he wants from you until this point, what do you think changed this time?

“Why did he ghost me?” I wish I could dispense more than possibilities for you, but only he knows the specific answer to this million-dollar question. Still, whatever his reason, the fact is that he ghosted, and that’s enough to tell you he wasn’t the one.

It sucks, I know, but you’ll live to ghost and be ghosted yet another day. As always, kindly leave a comment and share the article if you enjoyed it.