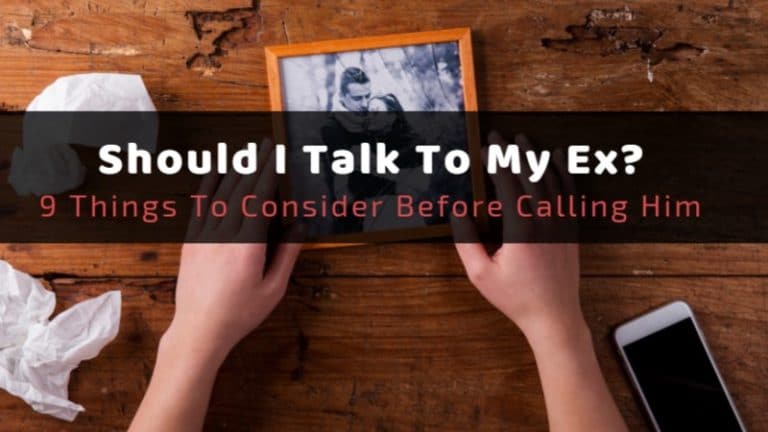 Should I Talk To My Ex? 9 Reasons To Consider Before Calling Him

Are you considering whether you should reopen communications with your ex?

Perhaps your head says ‘no’, but deep in your heart you really want to talk to him?

Are you wondering what the potential consequences of reaching out could be?

Well, this guide is here to lay them out for you.

Read on for a list of things you need to consider before talking to your ex after a long period of ‘no contact’.

If you’re curious about how your ex is doing, there is an alternative way of finding out, which I want to discuss with you now.

It feeds you data about his calls, texts and online activity, and there’s no way for your ex to discover that he’s being tracked.

It just requires a few of his basic details to get started.

I know plenty of women using this intelligent tool to start keeping tabs on their existing partners, perhaps because they are behaving suspiciously.

But it could also be used as a way of ‘catching up’ with an ex-boyfriend without actually having to reach out to him.

It’s 100% discreet, so you have nothing to lose. Click to learn more about this tool and to get started.

But what about actually talking to him? Is it such a bad idea? Could it be a good thing? Scroll down to see my answers to these questions…

What To Consider Before Picking Up That Phone

1. How Did The Relationship End?

The last thing you want is for him to reject your call or not text you back. Let's face it; you already feel bad enough not being with him, therefore, do not want to face further embarrassment should he ignore you.

Consider the way it ended between you. If it ended well with both of you agreeing to go separate ways, you have little to worry about talking to him. On the other hand, if it was all chaos at the time, perhaps you should not attempt talking to him.

You might decide to be friends after that, but even then it is good that you take some time to get over him. Don’t expect things to be the same as before, that you can talk to him any time you like.

No matter how it ended, consider setting boundaries to avoid assuming too much. Especially if it did not end too well, you might as well keep away.

2. What's Your Reason For Wanting To Talk To Your Ex?

You just heard that he lost his favorite uncle and even though you are not together anymore feel obliged to express your condolences? Perhaps even offer a little comfort to him?

Or he’s since lost his job, and from what you’ve heard is distraught, to say the least? In which case you want to run and offer him a shoulder to lean on? But does he really need that from you, you ask yourself?

If you have a valid reason to call your ex, you might as well go ahead talk to him. You might discover he appreciates the fact and it might further dissolve any tension between you two. Perhaps even make room for you to remain friends.

There are a couple of reasons you can continue talking to your ex. Here’s a look at a few of them.

Reasons To Talk To Your Ex

1. His Family Absolutely Loves You

Since she met you, his mother can't stop talking about what a good match you are for her son. Now that you are no longer together, she still sends you fresh pie over weekends. It's clear she is not about to forget you.

This is quite a tricky situation as you are likely to encounter your ex either in person or on the phone when talking to her. Perhaps his entire family adores you and will not relent keeping in touch with you.

In the circumstances, you find it difficult not to talk to him. Try not to get your feelings involved, however, as he has his mind made up already.

2. You Have A Past That Goes Way Back

You have shared many experiences together, some which are unforgettable. Say you were together on campus and he helped you settle in when you were new. He walked you through the process at the end which you got close.

If you share a number of experiences, it may not be possible not to talk to him entirely after you are through. Think of him as someone you cannot forget altogether since you go back to the time before you began seeing each other.

While it may not be possible to stop talking to him, you need to remember you no longer see each other therefore maintain the distance.

3. You Need Closure And Being Friends Will Help Your Cause

It will help you heal faster if you still have him in your circles. Even if it's not the same as before if you still talk to him might help ease your loss. Breaking up is never easy and since your peace of mind matters, talk to him if that helps.

After you finally get over it, you will be better suited to move on, to find someone else. Having processed and taken in the fact you are back in the race once more, you can now get on with life.

On the other hand, you might find you have many reasons not to talk to your ex. Most people prefer to go that way and maintain a safe distance once it’s over. They too have their reasons and so then is a look at some of the major ones.

Reasons To Let It Be

1. You Probably Need To Make Room For Someone New

You keep going back and forth trying for a comeback, but nothing seems to be working to make it happen. It happens after you’ve sworn not to send a text, but the weekend’s come, and you are lonely, and you end up doing just that.

What you are doing by hoping in something that is evidently over is messing up the chance to find someone else. Even though you feel no one can replace him, you will be surprised about the undiscovered potential all around.

Your ex is in your past and the earlier you let that sink in, the better it is for you. Why do you want to ruin your chances of finding happiness elsewhere by clinging onto what no longer exists?

2. Speaking To Him Revives The Ghosts

He hurt you so bad, and you thought you would cry your heart out. Just because you miss him is not reason enough to seek out conversation with the guy. Should it happen, you open yourself up for more hurt from memories of what took place before.

Instead of doing this to yourself, why don’t you hang out with people with positive vibes instead? I mean, people who bring out the good in you? Any conversation with your ex most likely stems from attempts to go back to the way things were before.

Save yourself the trouble and don’t give in to it. Dwelling in the past will drag you down, taking future happiness from you instead. Not exactly what you want to happen to you, right?

3. You Are Only Torturing Yourself

Going back to talking to your ex is like putting your hand in hot water. You got burned by the heat and will certainly get burnt again this time around. You need to be sensitive to the things that cause you pain and stay clear of them.

More likely he will hurt you again if you keep talking to him, therefore, why don’t you save yourself the pain? Quit torturing yourself with wishful thoughts of being back together and move on instead.

The temptation to check up on him or call him once in a while might take you over but then be ready for what is likely to happen after that. There’ll be more hurt as you realize it's like talking to hot air as it is unlikely you’ll get back together.

Ever broken up with a guy and then gone on talking to him or even had a roll in the hay once or twice only to realize things will never be the same? You’re dealing with the false hope you could get together again.

Only one out of ten relationships work out the second time around. That is after the two have been separated for a while. Don’t bet on being the minority and save yourself the pain of going through it all over again.

It is human to hope for the best, but when it comes to your ex, you are safer keeping hope down. Even if it appears as if hope is still alive don’t entertain the thought as you’re more likely seeing things through rose-colored glasses.

It is quite obvious that more often than not you are better off staying away from your ex. That includes talking to him, and you should steer clear of it entirely. You have an entire life ahead of you and are better off letting go of the past.

Many people try to keep the conversation going after the breakup but then realize things are no longer the same after that. It takes two people to want to continue seeing each other and if he already has his mind made up to move on don’t get in his way.

Even though you could have a good reason or two to stay in touch, you need to tread with care so that you don’t end up woven in the net again. That would only give you fresh hurt, and you’ll be back dealing with the pain again.

You May Also Like
Mean Things To Say To A Guy (101 Awful Phrases That’ll Hurt Him)
No Comments
Does He Still Love Me? 17 Signs Your Boyfriend, Husband, or Ex Still Loves You.
19 Comments
Is My Ex Trying To Make Me Jealous? (13 Ways to Tell)
No Comments