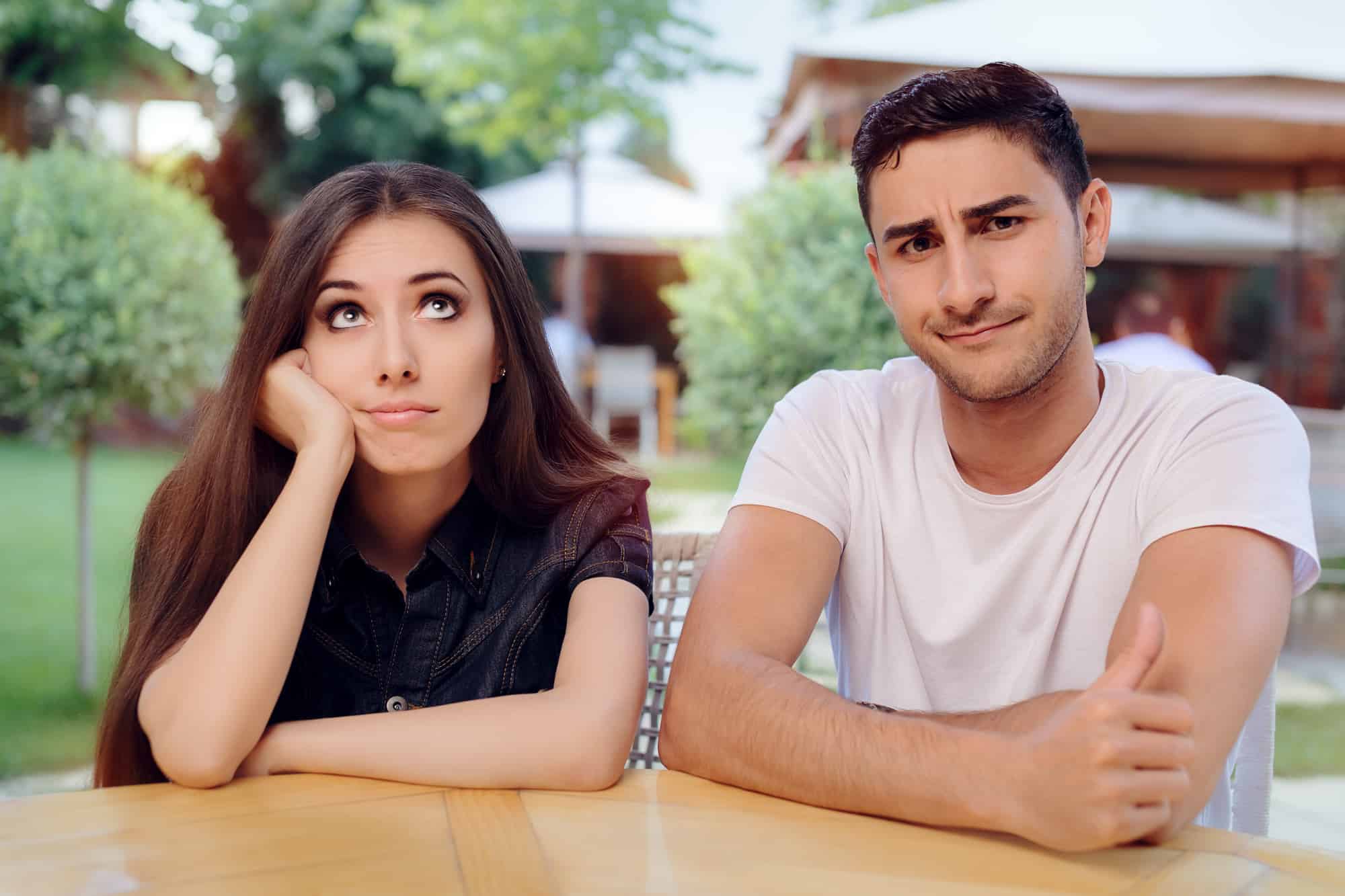 Unfortunately, bad dates are a normal part of the dating world, particularly in the online dating world. When you chat with someone online, you don’t get to know them as well as you do when the two of you are in person.

Then, when you meet them for a lunch date, that mask comes off. You finally get to see the real person instead of the image that they are portraying online. This can turn out wonderfully. They might be really funny! It can also turn out to be the worst date you have ever been on.

Signs Of A Bad Date

Sometimes, guys get nervous. They aren’t talkative and don’t know what to say other than “you’re so beautiful!” That isn’t the most fun first date, but it’s not necessarily a sign of a bad date either. If you’re wondering whether it was a bad date and trying to decide if you want to take a chance a second night out, keep an eye out for these signs.

How you feel during a date can speak volumes about the person that you’re with. You should never ignore your gut feeling. If you’re out with someone and do not feel like you are safe with them, don’t go out on another date. Do not waste your time trying to find the reason behind that feeling or go on a second date with someone that makes you feel that way.

2. He makes you uncomfortable

One of the worst things is when you click with someone online, but seconds into your first meeting in person they make you feel uncomfortable. If the person themselves is making you uncomfortable, take a step back to consider why they are. Is the conversation full of silences?

Do you think that you are safe? That can tell you whether you want to give them a second chance or not. Don’t forget to listen to your gut on this one, too.

When a person is rude to the waiter, it shows a lot about their character. If your date is packed with the guy not being polite to the staff, you, and just about anyone, you can trust that the second one will probably be worse. This is especially true if the guy doesn’t realize that he’s being disrespectful.  Don’t call him again.

4. They spend the date glued to their phone

This is dating etiquette 101. Don’t spend time on your phone. You can sneak it out to glance at a message or leave it on the table if you have children. However, when a man spends most of the evening looking at his phone it shows a clear lack of interest in you. It also makes for a very boring evening for you.

5. They get pushy about having sex

When a guy doesn’t respect your boundaries regarding sex, it shows that he’s only after one thing. Men that keep trying to end the night early while inviting you back to their place are not interested in getting to know you or having a relationship with you. Don’t even bother going out for drinks with this man.

This is one of the biggest red flags! You should be laughing and having a great time, not debating who should pay the bill. If this is how the beginning is going, do you want to see how the end is?

7. No direction in life

Asking people questions about life goals is a great way to get to know them! It’s one of the most popular subjects for that first time out to dinner. People with no direction will have a hard time answering questions about their future. At best, you’re going to get vague responses. If there is no direction in their life, there’s no hope for a relationship that slowly progresses over time either.

Have you ever been on a date where someone asks you rapid-fire questions? It makes sense that someone might want to go through all of their deal breakers because they don’t want to waste time. However, this is the opposite of fun for everyone involved. They might be more interested in finding a person to spend their life with than actually finding love.

9. There’s no interest in getting to know you

While asking too many questions can be uncomfortable, not asking any can be just as bad, but in a different way. When you’re out with a man, and he doesn’t inquire about anything, it shows that he’s not there to get to know you. You want someone that wants the same thing that you do, so you need to carefully consider whether you’ll give this guy another night to try again or not.

10. The conversation is painfully boring

This isn’t the fun guy that you thought it would be. Sometimes, first dates are awkward by nature, but this is different. The man doesn’t seem to have conversation skills. At all. There are so many nervous silences it makes you wish you had brought a friend along. Dating is supposed to be fun, not consist of the two of you staring at the table.

11. You find out you both want different things

He wants a one-night stand after dinner, and you want a long-term relationship. While the two of you can still have a great time, you can’t help but notice that he just wasted your time by not being honest in the beginning.

12. He won’t stop talking about his ex or his kids

These are two of the biggest turn off’s on a date. If he’s still talking about his ex non-stop, he’s obviously not over her yet. He might try to justify it, but don’t fall for it. You want a guy that is emotionally available, not still off mourning his previous relationship.

It’s understandable that people talk about their children. However, there are those people that are obsessed with their kids. They don’t have a life of their own. Going on a date consists of learning about their kid’s hobbies, mental health disorders, what’s going on in their life, etc. You’re dating them, not their kids (at least not yet.) This definitely makes you wonder if they even have any hobbies.

13. You’re not present at the moment

If you find your mind wandering off to what you’re going to get at the grocery store, how your job is going, etc. it’s a sign that it’s headed downhill. Even if he didn’t do anything wrong, you’re just not into him. You’ll always be present at the moment and hear what he’s saying when you really like him.

Should You Give Him Another Chance?

Whether or not you give him another chance is up to you. There are certain situations that you should definitely stay away from. Other ones, you might want to consider giving it another shot.

1. Listen To Your Gut

If you did not feel safe or something tells you that there is something wrong, don’t go out with him again. I cannot stress this enough. You don’t need a reason to say that you don’t want to. If you’re scared, simply say you don’t think you are compatible, or you don’t feel any chemistry and go about your life. There is no need to find a reason.

2. Give Awkward Guys Another Chance

You don’t have to go out again, but I’m a big fan of giving nervous first dates a second chance. This is especially true if he was great online and on the phone but clammed up while out to eat.

We all have anxiety on the first date. Some of us more so than others. He could just be entering back into the dating world again. Now, if the second one is just as bad, then you need to consider using that “we don’t have chemistry” excuse.

3. Remember That You Can’t Expect Him To Change

I never go out with a person that doesn’t have manners again. Or one that spent half the time we were out to dinner arguing about what I consider minimal things, such as who is paying the bill. I think that this says a lot about how they feel, and how they will act in the future.

I want to find someone that I’m compatible with, not someone that I need to encourage to go to therapy. It’s not our job to fix anyone else.

How do you know if a date went bad?

When a date went wrong, you’ll know. He will not want a hug or mention a second date. The conversation was dull. One of you spent the night talking about yourself or stuck staring at your phone. He spent the afternoon talking to everyone except for you.

Yes, a few bad dates are! Now that most of the modern world has turned to dating apps, bad dates are becoming a part of the norm. This is because you don’t get to know a person in real life before heading to a restaurant to meet them, which can leave plenty of room for personality clashes, disagreements, and different senses of humor.

What do you do after a bad date?

Call your best friend. Make light of the situation. Remember that bad dates are bound to happen to people during their lives. Remind yourself that it’s not you. If he felt awkward or was very impolite, that says quite a bit about him as a person. Not you.

Should I message after a bad date?

Only if you want another date. If you don’t plan on giving him another chance, don’t send him a message. When you text him, it is usually taken as a sign that you had a good time and would like to do it again. You don’t want him to misinterpret your text.

What makes a bad date?

Lack of conversational skills. Him asking too many questions or not enough questions. Dates that are disrespectful to you or other people. Either one of you being sucked into your phone instead of paying attention to the other one. Being pushy about wanting to have sex with you. You don’t laugh at his jokes.

Bad dates have quickly become a part of the dating routine. They seem to go hand in hand with online dating. What do you think makes a date bad? When should you give a person another chance?