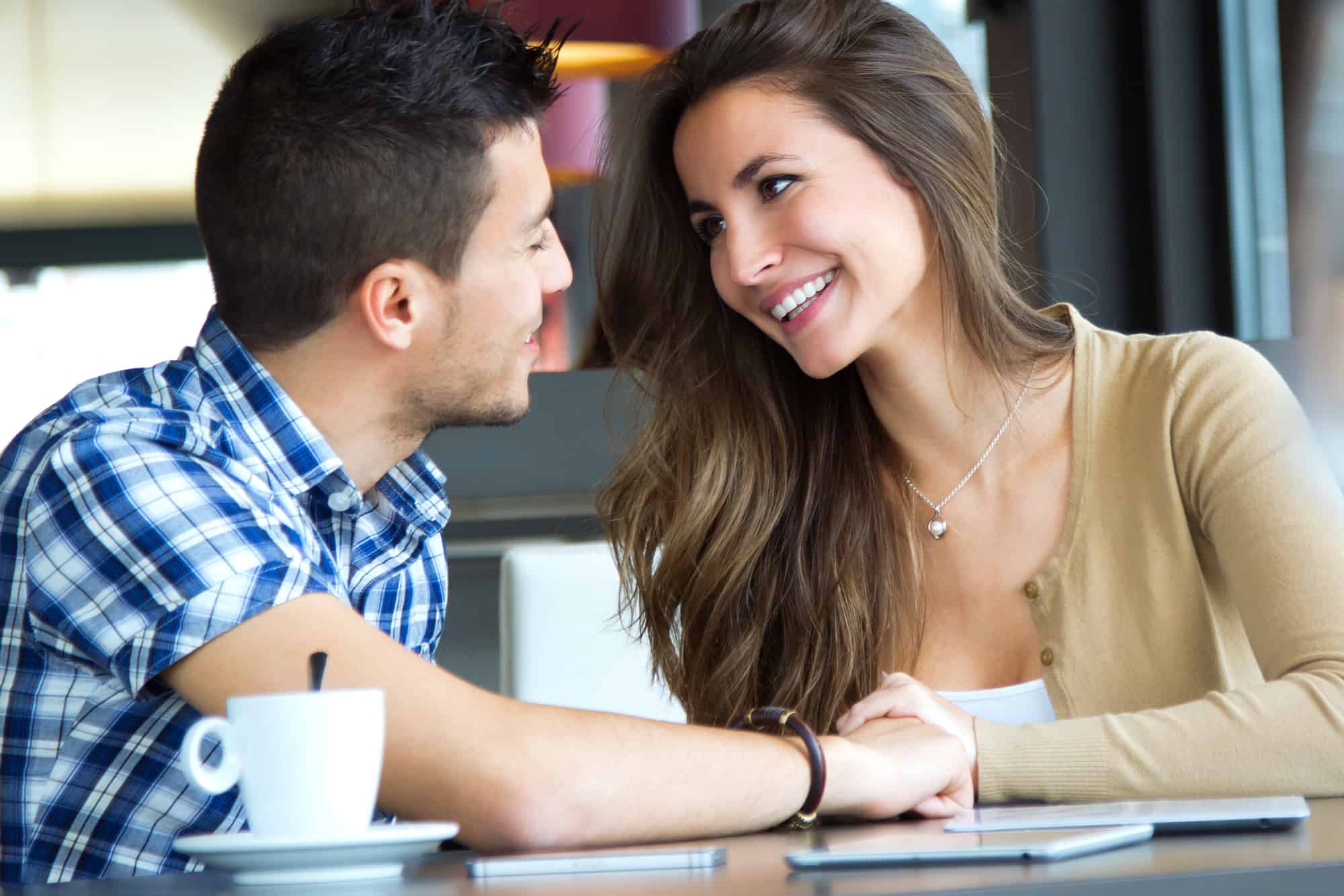 Flirtationship: What Is It And 5 Signs You're Stuck In One

Flirtationships are a contemporary concept and everywhere you look, there will be a different definition of what a flirtationship really is.

Is it simply the relationship you get as soon as you flirt with someone? No.

Perhaps it's when you're flirty with the person you're in a relationship with? No.

It can seem so complicated to figure out what a flirtationship really is, and how you can tell if you're in one.

So, I'm here to give you the full guide to what a flirtationship is, both the positives and the negatives to being in a flirtationship, and most importantly how to tell if you're stuck in one.

The first and most important question we need to address is "What is a flirtationship?". There's no set definition of what a flirtationship really is, so it's not as simple as finding the flirtationship meaning in the dictionary or providing a small sentence to sum it up. Essentially, a flirtationship is when friends that are attracted to each other are more than friends but not dating - both people use their best flirting skills to impress one another, but the situation between them never turns into a real relationship. There are no expectations between the two friends of getting together, and sometimes it can even occur when one of them, or both of them, are in a relationship already. Within a flirtationship, the pair won't be intimate or sexual with each other - the most physical thing that will happen will be a hug or a play fight. You will be flirting with a friend and have a connection, but have less than a relationship.

Why Do People Have Flirtationships? 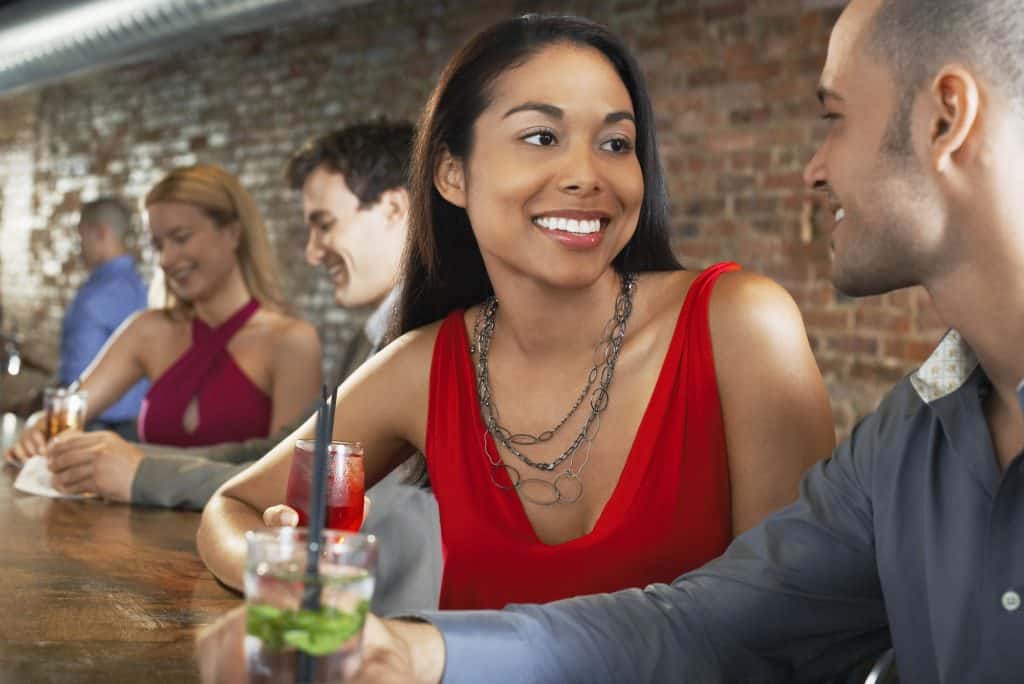 People don't necessarily choose to be in a flirtationship. The majority of the time, it's something that just comes about naturally when two people are attracted to each other. People also don't normally notice when they are in a flirtationship - which could be the reason you're here, reading this article, trying to figure out if you are in one or not.

But even if people don't mean to get into them, why do these kinds of relationships exist?

Although people don't choose to be in these kinds of relationships, there are several reasons why flirtationships exist. We will take a look at some of these below.

1 . One, Or Both Of Them Don't Want To Get Into A Relationship.

A flirtationship might occur because neither of the people involved wants to be in a relationship. They both enjoy having fun and flirting with someone they are attracted to, but they don't want to commit to them in terms of a romantic relationship, so they leave it how it is and don't cross any more romantic or intimate boundaries. A flirtationship could also occur when only one person from the pair doesn't want to be in a relationship. This can be a lot harder, especially if the other person does want a relationship. Feelings can get hurt, and things can get messy in this kind of situation.

2 . One, Or Both Of Them Are Already In A Relationship.

A flirtationship could occur because one of the people involved is already in a relationship with someone else. This person continues flirting with the other because they are attracted to them and they think it's harmless. This is a common situation in workplaces - one person will flirt because their partner isn't there. However, they would never do anything with the person they are in a flirtationship with because it would jeopardize their existing relationship. This could be difficult for the other person in the flirtationship because they might have wanted to pursue the other. A flirtationship could also occur between two people that are both in relationships. These two people will know that they are attracted to each other, so they'll flirt and have fun, but they will leave things there - they both know it would be wrong to be more intimate.

3 . They Are In A Difficult Situation. 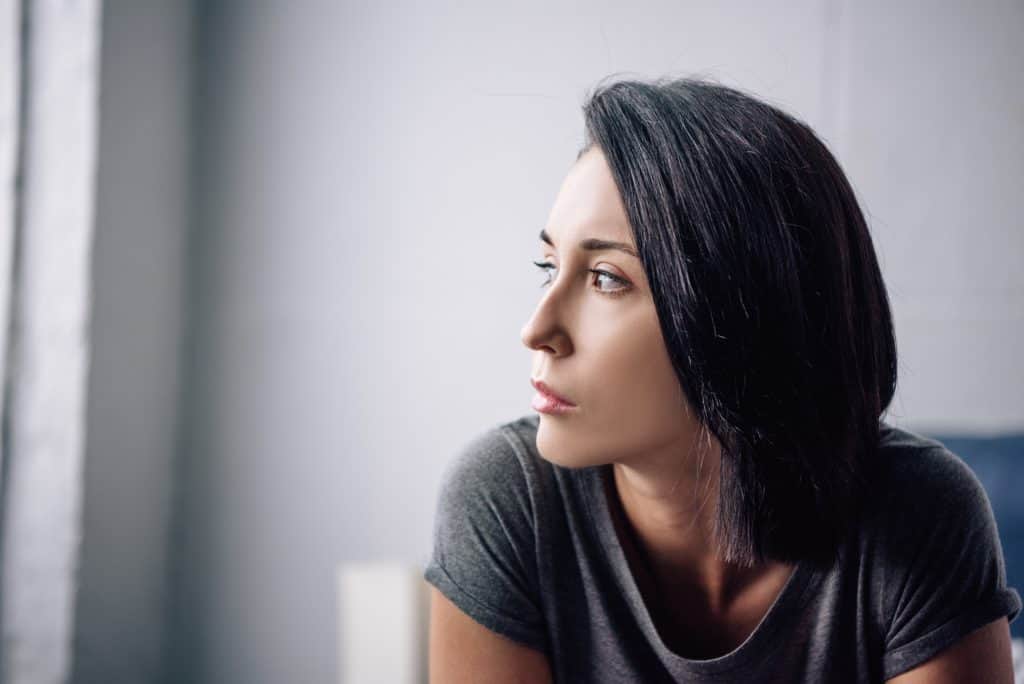 4 . They Are Long Distance.

With the technological world we live in, it's easy to flirt online. You might have a digital version of a flirtationship, but neither of them is willing to make the effort and travel to see the other. They will both decide to keep it how it is because things not work out if they decide to move into a long-distance relationship.

The Benefits Of A Flirtationship

In a flirtationship, there's no expectation or pressure put on moving forward together, unlike in the beginning stages of relationships. If you fall madly in love with each other, then that's (sometimes) a bonus! However, there's no pressure to fall in love, or move too much out from the friend zone. You can just stay comfortable and happy with where you are, having fun together and not taking it too seriously.

They Bring Fun To Your Life

Both of you will have fun together, you will enjoy each other's company so much, have private jokes between the two of you, play fight and make each other laugh. Flirtationsips bring joy to your life. This can be especially beneficial for either person if they have been through a rough breakup, or are finding their existing partnership particularly difficult. You have someone to tease, someone to laugh with and someone that doesn't expect anything from you - what can get better than that?

If It Ends, It Doesn't Matter 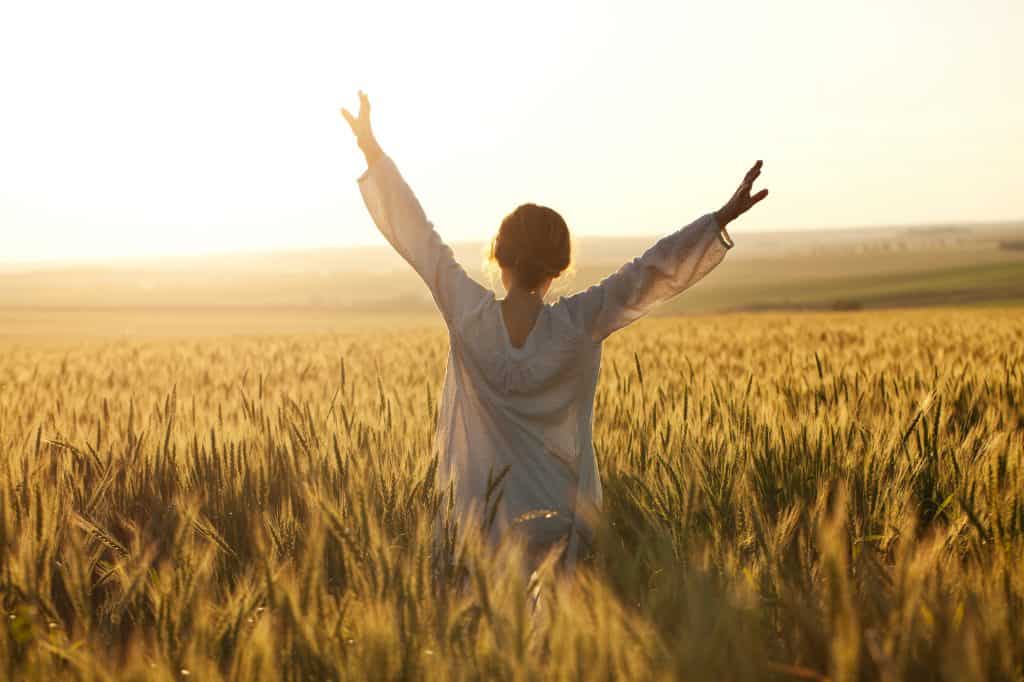 In a flirtationship, you aren't committed to the other person, and they know that. So, if and when the flirtationship comes to an end, it should end with no bad feelings. You won't experience any kind of heartbreak, especially because you were never intimate or sexual with this person. Flirtationships normally end in good spirits.

You Make A Good Friend

Flirtationships normally end on good terms (as we touched on above) and therefore you might always have a really good friend at your side from it. In a flirtationship, the two of you will get close to each other and even though there aren't any romantic emotions brought to the surface, you will care about each other. Flirting with someone also lets them get to know you on a deeper level, so you might have created a strong friendship that spans for longer than the flirtationship.

The Negatives Of A Flirtationship

There aren't many downsides of flirtationships, but, feelings might get hurt, and in extreme cases, hearts might be broken. You might fall madly in love with the person you're in a flirtationship with, but they definitely don't want anything with you, so you bring things to an end. The other person in the flirtationship might develop feelings for you, and you might feel awful having to tell them you don't feel the same. Others around might get hurt too - if either of you is already taken, your significant other might get jealous and upset.

You Might Be Getting Your Hopes Up For Nothing

You might think that you're in the beginning stages of a romantic relationship, but you're actually in a flirtationship. You may have visions of a future with this person, and you might even shut down to other people that are interested in you. You might get frustrated that the relationship isn't moving forward, only to find out or figure out that it was never going to go anywhere.

How Do You Know If You Are Stuck In A Flirtationship?

5 Signs You're Stuck In A Flirtationship 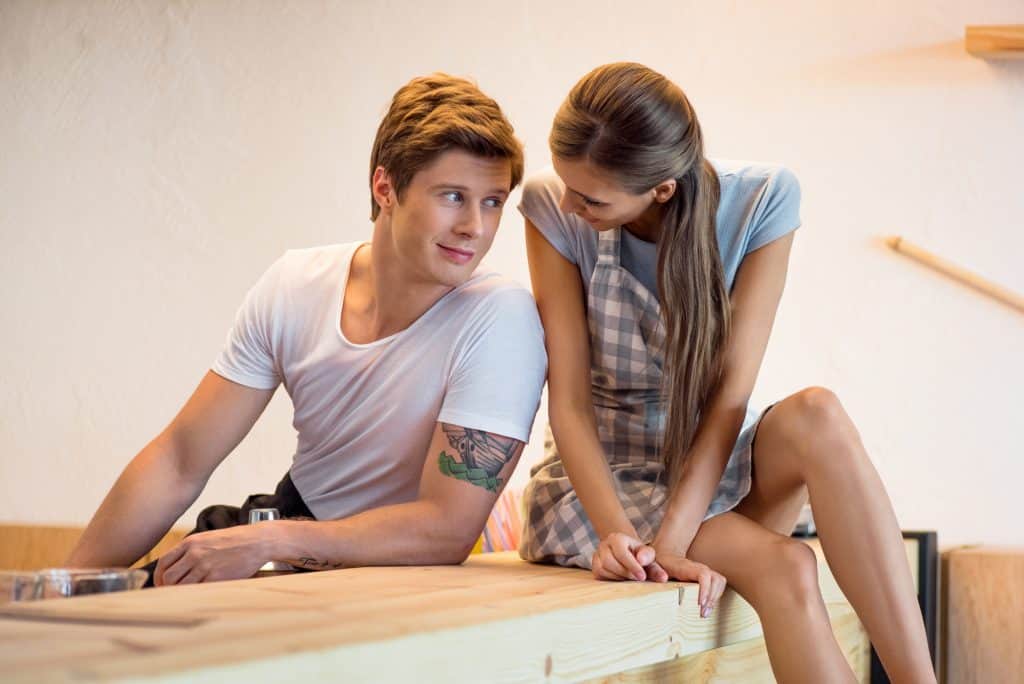 1 . You Haven't Been Intimate.

2 . You're Still Very Much In The Friend Zone.

Of course, a big part of a flirtationship is being friends. It's great that you're friends with this person, but if you are wanting to take it to the next level, this guy can't see you as just a friend anymore. If this person still acts very much like you are just friends, then this is a sign the flirtationship is still very much in existence, and it isn't going to blossom into more any time soon.

3 . Everyone Around You Is Bored With The Flirting And Wants You To Get Together.

When you're in a flirtationship, your friends around you will be able to tell that the two of you are very attracted to each other. If you are stuck in a flirtationship, everyone around you might start to get bored with the fact that you two flirt but nothing has progressed any further. You will be able to tell that you're stuck where you are if these people are nagging you to just get in on already. Clearly, nothing more is going to happen.

4 . When You Try To Bring The Situation Up, He Changes The Subject. 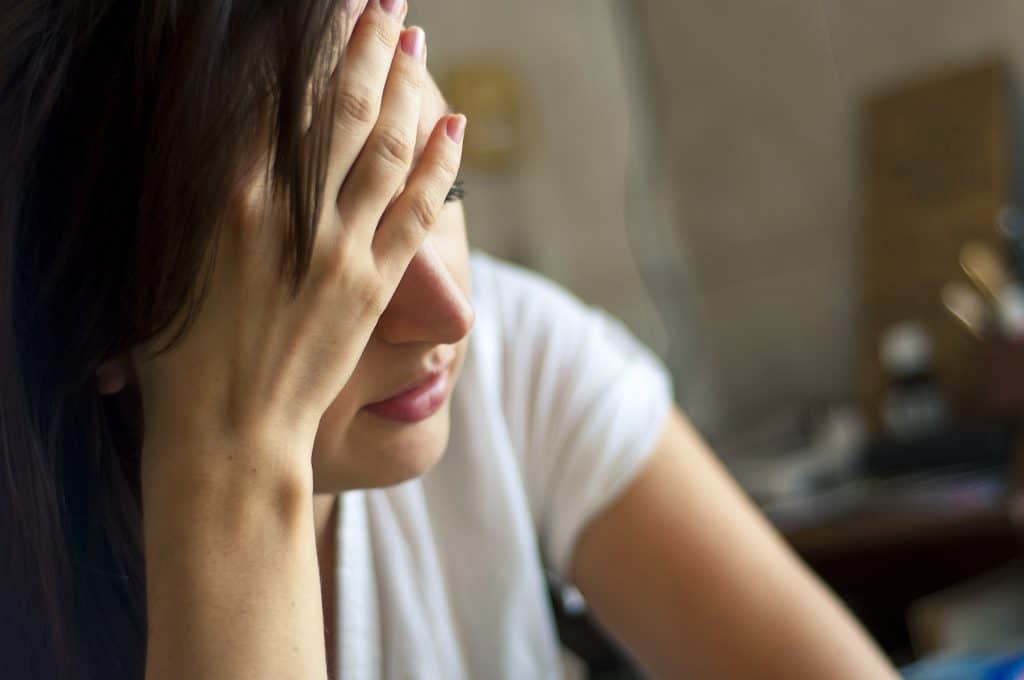 It's obvious you are stuck in a flirtationship if when you try to talk with this guy about where it's headed, he shuts it down. As soon as you bring up the topic, or ask him what's going on, he will either ignore you, tell you he doesn't want to talk about it, make a joke, or change the subject. This guy doesn't want to address it, because he doesn't see it going any further with you, and he's probably with what it's like right now.

If you have the feeling you're stuck in a flirtationship, this is undoubtedly because you are wanting more. You might try your hardest to flirt, look attractive or act sexy in an attempt to get this guy to move things up a level with you. However, if this guy knocks you down and rejects you at every attempt to show him you're the one for him, you're stuck.

Did you like this article? If you did, let us know in the comments. We would love to hear from you.