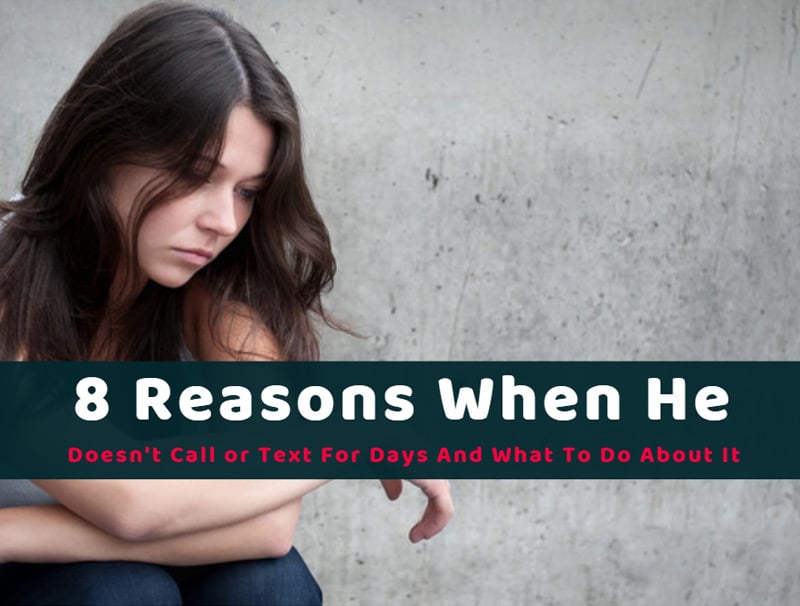 You’ve finally met a man who seems right for you.

He has everything you’ve been looking for in a guy, and everything seems right.

Until he stops calling or texting you for days.

You’ve even tried to reach out to him only to face the silence.

Now, you are mad and confused.

Why did he stop talking to you?

What are his reasons for not answering a text or a call?

Is it something that I have done?

Did he realize I wasn’t a good match for him?

Would I ever get an explanation for this silence?

Are surely filling up your mind right now.

To make it clear; while there might be dozens of reasons he’s not calling or texting, he has no excuse.

Before you do that, though, you must make sure he’s not cheating on you.

Yeah, that might be hard to accept. But one of the reasons he might avoid you is another woman.

An easy and discreet way to find out what he’s up to is with the help of a background checker like this (click on the link to go to their site).

This tool is intuitive to use and lets you know if he has active accounts on online dating sites and who are his friends on Facebook and other social media; things that can help you determine whether he’s cheating.

Now, hopefully that’s not your case.

I will now assume he isn’t cheating and you want to give him a second chance. So, let’s see why he doesn’t call or text you for days, and what to do about it.

Here are possible reasons why he doesn’t call or text for days.

1. He Has Another Girl

A good reason for him to take time away from you is to be with her. If he sneaks of a couple of days and does not communicate with you during that time it's very likely this is the case. The sneaky guy wants to have a bit of both sides and that’s why he won't reply to your texts.

Soon as he gets back, take the time to find out where he was during the time. You’ll likely get answers from here to Timbuktu but never mind as you’ll be able to at least have an idea. You might, however, realize the high chance he was away seeing a girl during that time.

It is that time of the year and your crush and his entire family travel to the country for grandpa’s memorial. He’s gone a couple of days without as much as a word and you’re wondering why your texts go unanswered.

He’s the kind that gets so immersed in work he does nothing else besides that. Even though he could be interested in you do not expect him to answer while he’s at work. Or he simply doesn’t like to keep talking back and forth preferring instead to only do so when it’s convenient to him.

4. He Likes To Play Hard To Get

Sounds misplaced, right? It is the girl who would play that game normally, but your crush likes keeping a distance every once in a while. Might be his way of getting you to want him thus decides to go quiet for some time.

Hard as it may be to think they exist in this era, there are guys that are not big fans of the phone. They miss out on messages at times and even taking calls feels like a chore to them. Call them antisocial and kind of misplaced, but they are there and if your crush is one of them you can expect slow communication.

6. He's Not Willing To Commit

You’ve gone out with the guy and you look forward to more time together. He made you laugh most of the time you were together and left you yearning to know him better. He sure seems like a fun dude to have around. There’s only one problem though. Since you were together he has not called or texted you. He won't call to check how you’re getting on and appears not to see your texts.

7. He Awaits Your Signal So He Can Make A Move

You might be assuming he’s ignoring your texts but have you thought that he might just be low on confidence, requiring you to make yet another move? Let’s face it, some people require more than just a show of interest to keep going.

Your crush might be the kind that does not initiate things but prefers to have sufficient encouragement to get him to make a move. If that’s the case you could go ahead, send another text and then keep your fingers crossed with the hope he will get back to you this time around.

He might actually have you out of his mind already if they’re back together and it would be good if you can keep out of his life. Chances are he may not even remember you after that.

What To Do When He Doesn't Call Or Text For Days?

You don’t need to humiliate yourself further, therefore, don’t send any more texts to the guy as doing so only serves to bloat his ego some more. Forget the urge to check how he’s doing and even if the attraction is quite strong don’t entertain him further.

Don't Let Disappointment Show Next You See Him

The worst you can do is to let him know you feel let down by his failure to call or text you. Play it cool and the next time you meet act like you’re seeing him for the first time. It will get him confused, unable to make sense of what you have up your sleeve. Also give you something to pride yourself in, having succeeded in leaving him wondering if he should not have done the right thing and responded to your texts.

Go Back To Your Life

There’s still life out there and you need to get on with it. The fact he does not reply to your texts does not mean it is over for you. You can still find someone who is more interested in you out there. Besides, keep involved with other activities to ensure you have no time to sit mulling over him.

More often than not if a guy is unwilling to keep up with your calls and text messages it means he’s not really interested and may be finding it hard to get the message to you. His choice is to remain silent, act as if he does not read your texts and ignore your calls.

Only in a few cases can his silence be out of other reasons as there’s no reason he should not find the time to contact you. If he really cares about getting closer he will no doubt make effort to stay in touch with you.

Don’t rush with such a guy without finding out what his silence means. Take some time as well to figure out where you’re going with the chase then decide if it’s something you want to keep on with after all. There’s no need to rush into things as if you play your cards right he might be the one to come looking for you.