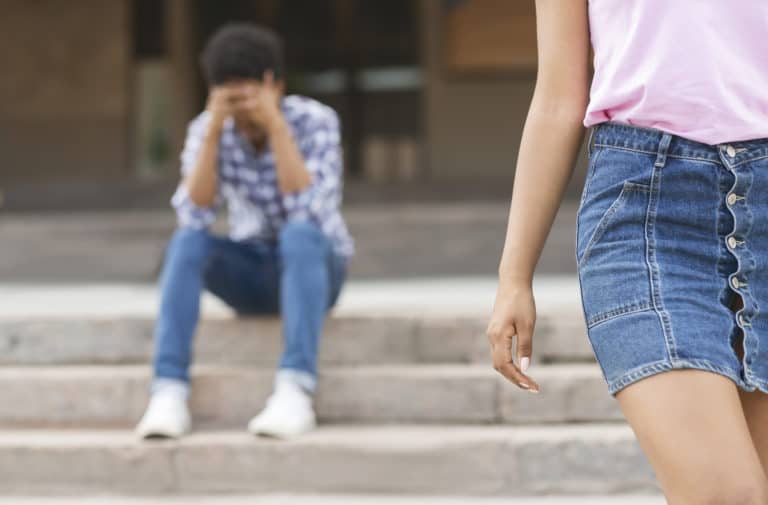 Do Guys Hurt After A Breakup? (9 Signs And What It Means)

Is it true that guys hurt after a breakup? Well, I guess it all depends on the guy and the relationship.

Men are not that different from women after all. They have the same feelings and emotions as us girls, they just show their feelings in different ways.

Women are pretty open about how they feel after a breakup. Women’s breakups are even immortalised in movie scenes. The boyfriend has just dumped the girl so what does she do?

She does what every other broken-hearted female has done since the dawn of time. She calls her girlfriends, cracks open a tub of Ben & Jerry’s and puts Beaches on repeat.

So, we all know that girls and guys hurt after a breakup but what are the signs that guys are hurting? Men are conditioned from birth to hide their feelings. They are told not to cry in public because it is not manly.

Guys are frightened to show their emotions because they imagine they will come across as weak and pathetic. But all is not lost. There are definite signs that can tell you if a guy is struggling after a relationship has ended. Of course, my next question to you is why do you want to know? Are you a woman dealing with heartbreak right now?

Do you want to know if your ex-boyfriend is hurting because you are hoping for a reconciliation?

Are you dating someone new and you wonder if they are really over the breakup of a previous girlfriend?

Have you just broken up with your partner and you are regretting your decision and you want to know if they could forgive you?

Is one of your ex-partners acting strangely and you are not sure if you are in danger?

Remember, it’s all very well picking up on the clues and subtle signals of human behaviour, but you need to interpret them as well.

The circumstances regarding the guy, the state of the relationship, the breakup and most importantly, your reasons for asking the question should all be taken into account.

9 Signs A Guy Is Hurting After A Breakup

1. He keeps texting and calling you

There is a danger that texting and calling could be a sign of possible stalking behaviour. If you are constantly receiving unwanted messages, messages that are angry or threaten violence then report them to the police.

2. He goes back to his bad habits

However, at the end of a breakup testosterone levels rise again. High levels of these male hormones are responsible for increased aggression, lower empathy, a higher sex drive, and dominance. It is not surprising then that men resort to previous bad behaviour as a coping mechanism.

3. He is posting nostalgic pictures of you both on social media

If you want evidence that your partner wants to get back together with you then check out his social media posts. If they are full of old photographs of the two of you then that is one huge red flag.

When we are grieving over the loss of a relationship we feel better simply by looking at that person. It helps to ease the pain of losing our love. We are reminiscing and hoping that by posting happier times our ex may reconsider breaking up in the first place.

4. He immediately starts dating someone else

Immediately embarking on a new relationship is not what you would expect from a guy that is hurting. But we have all heard of the rebound relationship and this is a typical example of one.

He is hurting from the breakup of your relationship but he misses the companionship of being with someone. Unfortunately, anyone will do. Then of course there is the increase in testosterone. We know that higher levels affect the male sex drive. There is also the possibility that he is using this as a way to make you feel jealous.

5. He goes silent on you

I always knew when one of my ex-boyfriends was upset with me because he would give me the silent treatment for days. It was his way of ‘punishing’ me.

He would cut off all contact, not answer my calls or texts, or pretend to be out whenever I went to his apartment. When he was ready, he would ‘allow’ the contact to resume. Some guys need space to deal with their heartbreak. They don’t want to reveal their emotions.

6. He is seen out drinking and partying with his friends

On the other hand, you have the guys that want to make sure you know what a great time they are having without you. This is a kind of ‘faking it’ attitude. It is a defence mechanism, or a barrier if you like.

They are protecting their feelings by attacking first. They act as if they don’t care about the breakup. Obviously, there could be the possibility that he is out drowning his sorrows. Only you will know whether this is a sign or not.

7. He unfriends you on social media

This was another of my ex-boyfriend’s tricks when he was hurting. He would unfriend me on Facebook so that I could not get in touch with him. Sometimes it is just too painful to have constant reminders of someone you are still in love with.

It is much easier to cut off all contact with them. Out of sight – out of mind so to speak. If you are hurting and trying to move on, you don’t want your ex popping up on your timeline every now and then.

8. He trash-talks about you behind your back

Of all the breakups in my life I remember one particularly difficult one. I had broken up with one of my ex-boyfriends many years ago and found out that this man had been spreading awful rumours about me. Apparently, he had been frequenting the clubs and bars I used to go in and would tell lies about me.

I knew he was upset when I ended our relationship but I couldn’t understand why he would be so nasty afterwards. Now I realise that he was terribly hurt and wanted to take his hurt out on me.

9. He starts popping up at places he knows you frequent

Talking of this particular ex-boyfriend, after our relationship ended he would start going to the places that I always went to with my girlfriends. If I didn’t happen to be there he would hassle my friends and ask them to speak to me.

When they declined he would get angry and start belittling them as well. If you keep bumping into your ex-boyfriend it is probably not a coincidence.

Do guys feel pain after a breakup?

Guys do feel pain but women tend to suffer more emotional pain after a breakup. It’s all to do with evolution. Women are invested in finding a mate that stays with them to rear their offspring. On the other hand, men are geared towards multiple partnerships to ensure their genes are successfully replicated.

What do guys feel after they break up with you?

Guys tend to feel more anger and aggression than emotional grief after a breakup. Although women report a lowering of self-esteem, they will analyse what went wrong and learn from the experience. Men handle breakups differently. They will re-engage in destructive behaviors.

Why do guys act like they don't care after a breakup?

Men have been taught from an early age to hide their feelings. It is not manly to show their emotions. They are told to stop crying, be a man, don’t be a baby. As a result, men deal with breakups as if they don’t care. Society is shocked to see a man cry post-breakup.

Who hurts more after a breakup?

Generally speaking, it is the girlfriend that hurts more when a relationship ends. Women invest their futures in their partner whereas men tend to take the relationship on a day-to-day basis. However, you will get sensitive men and women who lack empathy.

How long does it take guys to regret breaking up?

Women like to deconstruct and analyse a relationship post-breakup. As a result, they mentally work through grief and regrets and can move on. Because men ignore or hide their feelings away, they do not get the opportunity to dissect and digest in the same way. Therefore, sometimes it can take years, if not decades for a man to get over the break-up of a relationship.

Men and women are certainly different creatures when it comes to how they handle breakups. Although it is difficult to know whether a guy is hurting when a relationship ends, there are signs to look out for.

Hopefully, this article has given you the answers you were looking for. If you enjoyed reading it then please do share it with your friends.