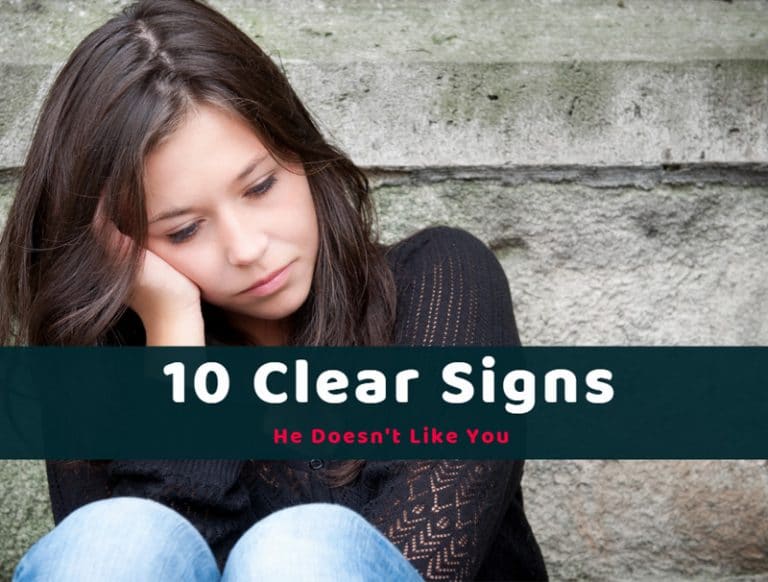 So, you’ve fallen for him and wonder how he feels? Perhaps you should start looking for signs. Whether he likes you or not, there will be plenty. What are the signs he doesn’t like you? I hear you wonder? Let’s find them out!

A keen observation of body language and a person’s behavior enables you to deduce whether or not he‘s interested in you.

Guys are not the greatest communicators, but they send out signals all the time. Especially when a girl is concerned. These might be either positive or negative, depending on the way they feel. Look out for the thing he says to you without even having to open his mouth and say a word.

So you’ve met this guy, and you want to know if he even notices you exist. You don’t want to waste your time wishing on a star and would rather find out if he’s interested in any way you can? What are the signs he doesn’t like you? Check them out below.

Prefers spending time with other girls

A guy who is interested in you will definitely want to spend time with you. If you’ve been trying to catch his eye but notice he would rather spend time with other girls, he most likely doesn’t like you. If he did, you’d be one of the ones he likes to hang out with.

If you’ve made an attempt to have him notice you but notice he’d rather be with other girls, there’s fat chance you’re not on his mind. Trust me you’d know if he likes you as he’d be trailing you all over the place.

Is not bothered about you seeing other guys

A guy who likes you will not like to have competition from others and will no doubt notice any mention you might be interested in someone else. If you mention such a thing and he does not even look up, that tells he doesn't like you.

If he were, the mere mention that you like someone else would have him all over you, trying to get to the bottom of things. As it is if it does not spark a reaction from the guy it only shows he is just not interested.

He has little interest in what you say

People listen to those who are important to them. You’ll be able to select the things to remember if they are important to you. This brings me to the point about the guy you’ve been eyeing.

If the two have spoken before and he remembers much of the details of the conversation you had that’s a good sign. If on the other hand he doesn’t remember your name, to begin with, and struggles to recall what you spoke about when you met then it means he doesn’t like you.

You’ve been hoping you mean something to the guy whom you like. At least he can send a sign you mean something to him by treating you differently from the way he treats other people, right? Well, that’s not happening, and from what you see you might well be the next girl on the queue, and he might not tell the difference.

If he likes you, he’ll make a move to get closer probably by the way that he acts towards you. This tells a lot about the current state of things and any chance you have he likes you.

He does not hide the fact he’s seeing other women

Let's face it. If you met a guy and were more interested in telling him about a man you met who’s making you spend sleepless nights how’s that for interest? You’d probably share details of the one you’re interested to make the guy aware you are not available.

The same thing goes for the guy and if he mentions he has interest in someone else do your self a favor, put distance between you two. The mere fact he finds it necessary to bring up another girl tells you what direction his interest takes.

You are the one to always seek him out

The guy whom you like has not made any attempt to make contact with you. The few conversations you’ve had so far start with you each time, and he has not made a move in reaching out. Quite telling of his level of interest towards you.

If he likes you, he’ll no doubt make the attempt to talk to you. You don’t always have to be the one to initiate conversation, but instead, he’ll be the one to seek you out. Now that it's not happening could only mean the guy has no interest in you and does not like you.

Busy as a bee with no time for you

Anytime you make an effort to get together you are slapped with claims that he’s too busy to see you at the time. That followed by the fact he doesn’t make any attempt to reach out after that. Trust me; if he likes you, he’ll make the time to be with you.

Push aside the claims that his work takes up most of his time leaving him no time to be with you. Or that he’s taking care of a sick relative and cannot afford to come over to see you.

If he liked you, he'd do anything to make sure he sees you and also regularly make contact with you. It is plain and simple; the guy doesn’t like you and so isn't wasting any time talking to you. Quit having any hope that he’s straight with the claims he’s too busy.

You know the way it usually goes. If a guy likes you, he’ll try to get close to you even in the littlest way. He will find little ways of being close and to touch you. If you work together, the guy will take the seat next to you at a meeting.

If on the other hand he shows no interest to even take your hand but prefers instead to keep things formal with you he has no interest in pairing up. Perhaps you’ve even tried to initiate contact but each time is met with a cool sendoff much like he doesn’t care.

Don’t even think it’s because he’s not the touchy type or that he's conventional with you. If he liked you one bit, he’d keep trying to reach out and make touch with you.

You’ve sent a couple of text messages to the guy since you exchanged numbers on the first meeting. None of them got a response, and you prefer to believe he somehow missed them. Or was perhaps too busy to respond at the time.

Perhaps he does answer your texts but takes a whole lot of time to do so, even then answering with only a few words. Straight and to the point, no flowery language in the least. You answer him back as soon as you read his text than sit back to wait another day to get a response.

The fact that he’s not answering your texts means that he has no liking for you and is hoping you get the message and buzz off. Perhaps spare him further trouble and give the guy some space.

He introduces you to his hot friends

Don’t take it that he is polite when he tugs male friends over to meet you. A guy often knows his boundaries and does not entertain competition of any form. Not even from those that are close to him such as pals he hangs out with.

The fact that he has other guys over to meet you means he’s not worried to lose you to them. Come to think of it; he might actually be trying to hook you up to one of them. Chances of him liking you are much lower if he does this means he really doesn’t care about you.

The body language of a guy who likes you reveals more than what he might say to you. His actions too, as these are not predetermined, but he's actually himself with you. He’s merely letting his thoughts (or lack of them) towards you out in the open. And they are that he doesn’t like you enough to want to hook up.

Life’s not fair at times, and we tend to notice people who have not the slightest interest in us. It’s only fair for a girl to try and catch the eye of the guy she’s crushing on but if he shows you outright that he doesn’t like you, then you have a raw deal.

Take flight and quit entertaining further thoughts of the guy as it’ll mostly lead to further disappointments for you. He has nothing to hide and has shown you he does not even like to think of you together with him. Take the hint and find someone else to hook up with for now.

You May Also Like
Do Opposites Attract? (3+ Important Factors)
No Comments
How To Outsmart A Romance Scammer: 13 Tips
No Comments
Sexy Talk: How To Talk Dirty To A Guy
2 Comments