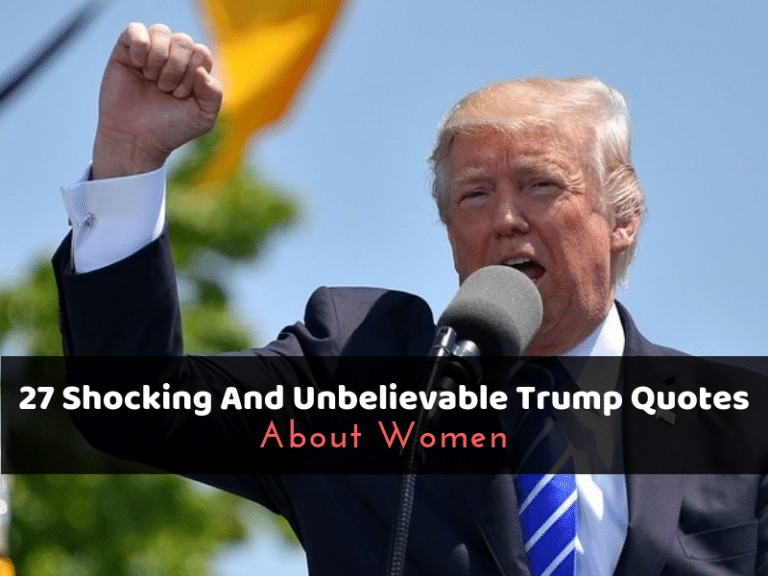 Have you ever had to be in a congress where Donald Trump said disparaging things about women or have you ever had to sit to watch the TV to hear the great American President speak but you end up leaving in disappointment because all you hear in-between words are anti-feminist statements?

Well, that’s who we elected. At a point, I thought it was a means to gain the attention of some sects in the society during his presidential campaign but I got it all wrong. It’s who he is. Before we look at some of his quotes, let’s see if Trump can be considered a misogynist.

There has been lot of questions on why Donald Trump would treat ladies as he likes. Not only does he talk ill about the female sex, he goes on to tweet his thoughts. He says all sort without making a conscious and an unconscious effort to think about the effect of what he says on the female sex.

Being a misogynist mainly involves having a natural hatred for women, discriminating against women and belittling their importance in life. Well, Trump has actually shown all of these trait in his comments about women irrespective of class or grade.

From his statements, I have been able to deduce that not only does he dislike women and see them as lesser beings, he uses his indifferent interest in women as a means to protect his own interest and gain popularity amongst people of same mind-set.

By stylishly bringing in unremarkable comments about women he manipulates people to navigate his way in achieving a goal. While some people may even denied their misogynist mind-set, it is quite obvious that Donald Trump is not from such school of thought.

His sexist standpoint was further revealed when Washington post published his conversation with Anchor-man Billy Bush in October 2016. In the posted he was quoted saying ‘I don’t even wait, and when you’re a star, then let you do it, you can do anything… grab them by the pussy.’’ People have wondered how easy it was for him to use the p-word. Much more, how convenient it was for him to imply that he can assault without being reprimanded. Though he denied it (since he knew it could jeopardize his career) but Billy Bush stood his ground by stating that the president had lied.

Louise Sunshine who worked for Donald Trump in his real estate business for about 12 years told Washington post how she had to make conscious effort to maintain her weight all through her years of appointment.

According to her, the business mogul kept a fat picture of hers in his drawer and anytime she did something offensive to him, he would pull out and stare at him to remind him that she wasn’t perfect.

It was also recorded that he diminished the importance of his wife, Ivana during an interview with Vanity Fair. He had unapologetically stated how he would never buy her decent jewels of pictures. In his words ‘Why give her negotiable assets?’ So it is safe to say he practically meant that she is incapable to manage any of his assets.

While everyone thought he would desist from this act upon appointment into office, he seemed not to even care about anyone’s opinion as he further tweets on any one that catches his interest.

Whether blatantly or indirectly, Donald Trump has said so many things concerning the female sex and that makes feeling about females so obvious. Most women have tried to stop him by commenting on his attitude but all their efforts have been unyielding as they end up being a victim of his use of disparaging words

Those who have considered him as a misogynist thinks he would never change. However, women who have the power stand against him have planned to continue to speak up irrespective.

You May Also Like
How To Find A Boyfriend (41 Helpful Tips)
No Comments
Being A Third Wheel (23 Ways To Deal With Being the Third Wheel)
No Comments
Will I Ever Find Love? (31 Ways to Improve Your Chances)
2 Comments