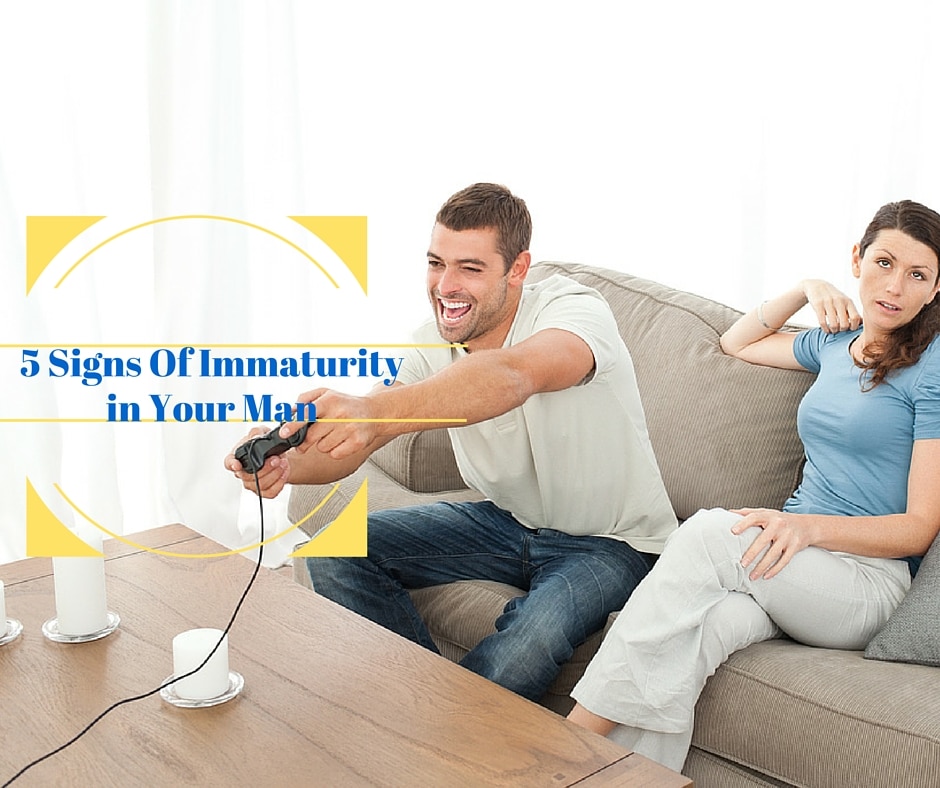 5 Signs Of Immaturity in Your Man

Men who are immature may very well be a lot of fun and easy going in the early stages of a relationship but as time goes by and things get more serious, it can start becoming a problem. If you’re worried that your man might be immature then here are some signs that will tell you whether he is or not.

Being in a relationship with an immature man can be problematic as things such as buying a house, getting married or having kids is something that is beyond his thinking. You may feel that you give everything in the relationship but aren’t getting in return from him. Immature men can be very selfish because they do not have a grasp of responsibility and will struggle to go 50/50 in a relationship in terms of housework, finances and planning.

You may even feel that you have to mother him which is not something that you want to do in a relationship. If you wanted to be motherly, you’d have kids. You need a man not a boy but can you turn a boy into a man?

Here are some sign that you are dealing with an immature man:

Mature men will have respect and handle themselves well whereas if your man is immature he most likely has some embarrassing behaviors such as drinking too much at the family dinner, turning on the football when having dinner at your parents’ house or answering his phone at a wedding. They don’t seem to really understand what is appropriate and what is inappropriate.

While their embarrassing behavior may have seemed funny to you when you first started dating, this can quickly start to become embarrassing. The worse thing about it is if you try and tell him that he is doing, he will strop and pout because you have “told him off”.​

This is certainly a habit that completely winds me up. Don’t get me wrong, I’m not going to stop my man from playing video games every now and again because he enjoys it and I would hate it if he stopped me from doing something I enjoyed. However there is a difference between having a quick game and becoming completely obsessed.

If your guy doesn’t want to go out with you on a night out because he needs to complete a level on his game or because all his mates are playing online then this is a clear sign immaturity. My guy has an Xbox and he enjoys playing every now and again but he would never play for hours and he would never not go out because he wanted to play.

Another problem is that gaming can be quite expensive with the costs of the console itself and the many games. Things can be worse if your man has failed to pay a bill because he just had to get the latest game that everyone is talking about. This level of obsession is not good and it shows that he has no sense of responsibility.

HE DOESN’T PAY ATTENTION TO YOUR FEELINGS​

If you feel that your guy never seems to really know how you feel or doesn’t take your feelings into consideration then it is a sign of immaturity. Mature adults takes into account their partners feelings and others feelings too. Have you wanted to go to a family party but he has refused to go and doesn’t particularly care about how this makes you feel? Does he ignore your opinions if they are different to his own opinions?

These are just a couple example of someone who is emotionally immature. This can be a hard one to get around as changing the way someone thinks is not easy task.

One of the more obvious signs that you’re guy is immature is if he is selfish. If you find that the presents he buys you somehow benefit him also then he isn’t really taking into consideration what you want. If he never offers to make you dinner or even a coffee even though you offer him the same then this is a sign that he is quite selfish.

Mature men will always think about you and what you want and no what they want. They should naturally want to look after you and not have you look after them as if you are their mom. No woman wants to feel like they are the mom figure in the relationship even if you are actually a mom. You want to feel like a woman and him letting you wait on him and foot while he offers nothing in return is no way to feel empowered.

If your guy tends to put his mates before you then he is almost certainly immature. If you find that he always cancels on you’re to go out with his friends or doesn’t confirm for dates until the last minute then he is more than likely waiting for a better offer to come along such as a lad’s night out.

This is not a good trait for your guy to have and it will more than likely make you feel that you are his second choice which is more than understandable to think like that. While you never want to stop him from going out with his friends, you do not want him to cancel plans with you to do so.

If your guy is doing this then I believe it is time to talk to him about it and explain how it hurts your feelings and that it makes you always feel second best. If he can’t understand that what he is doing wrong then you need to ask yourself whether he really does care for you. I know you probably don’t want to hear that but a man who truly loves you or is interested in you would always put you first… even over his friends.​